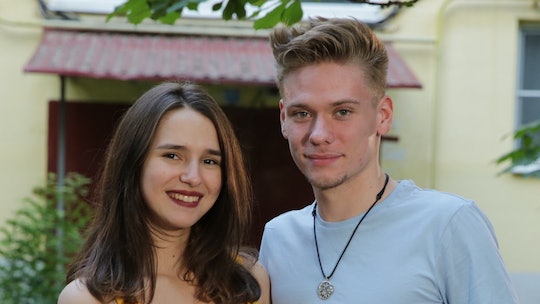 This Is Where '90 Day Fiance Couple Steven & Olga Stand

90 Day Fiancé fans are clamoring for any and all updates on their favorite reality TV couples. No truer words have been spoken whne it comes to Season 6 couple, Steven Frend and Olga Koshimbetova. The two have had their share of ups and downs (and downs and more downs), so it's hard to know what will happen from each episode to the next. If you're among the many fans wondering if Steven and Olga break up on 90 Day Fiancé, I've got you.

With all the recent chaos surrounding Steven's verbal attack on last Sundays' episode, Olga rushed to defend her man on Instagram saying, “To everyone out there, stop being so concerned of my well being and let me make my own life decisions, I know what’s best for me and my family. I know Steven better than every single one of you,” she wrote. “For you all to ‘care’ about me is okay but I do not appreciate the way you all are trying to do so, stop. Your opinions will never take an affect in my relationship with him but I am tired for seeing this. If you all care so much for my well-being, let me be happy and live my life the way I want too. Love.”

The post came after Olga had their baby via cesarean section with Steven complaining Olga's attention was too focused on their newborn baby boy, Richie. In the aftermath, Steven stormed out of their place and Olga was seemingly devastated, and rightfully so. Previously, Steven's jealousy trickled through as their relationship so obviously changed after the baby (as it does). "Our son cannot be the main thing, we have to keep focusing on us as well," he said on the show. "We have to put equal time — the kid can’t be before me,” Steven told Olga. "I can’t put the kid before you, we both have to come equally."

Steven also took to Instagram with an appreciation post. He didn't mention Olga by name, but it's clear his words were meant for her saying, "Family comes first. I appreciate all you do for our family and little one." In another post, he elaborated stating, "Yes, I realize that I was a bit rude and gave vent to my emotions to a girl who was going through a lot after giving birth. Like any person, I make mistakes, I learn. No one on earth is perfect. I know my cons and I’m working on it. I love this girl with all my heart and soul and thank her for our son. For these two people, I am ready for anything, because they are my everything. I understand that I can not take and change the opinion of each person. It’s impossible. But I will not make excuses either. As an honest person, I say that I made a mistake, and I apologized. For me, my family comes first."

Sure, Olga wants Steven to wash his hands before touching Richie, and, as any new parents, they're struggling to find their footing within the relationship while adjusting to parenthood. And they do have some silly arguments that would be better off squashed than had. Jealous of a baby? It's definitely not a good sign. But that doesn't mean the pair is headed for splitsville. As far as whether or not they're still together, social media accounts point to yes. That doesn't mean they're married, though, so there's still time for a major breakup this season.