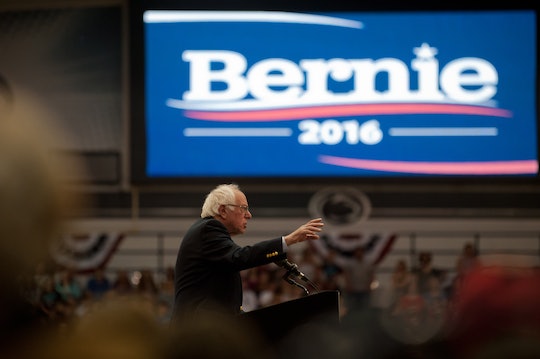 Will Superdelegates Actually Change Their Minds? It May Be Bernie's Only Hope

Does Vermont Sen. Bernie Sanders really still have a shot at the Democratic presidential nomination? It depends on who you ask. Supporters of former Secretary of State Hillary Clinton will argue that she's winning the popular vote, and has a lead of 741 delegates (1,930 to Sanders' 1,189). But Bernie Bros insist that Clinton's only leading by 277 delegates. What's with the fuzzy math? Well, it all depends on if you're counting superdelegates or not. Superdelegates' votes aren't pledged, meaning they can switch teams at any time. But will the superdelegates actually change their minds and hand the nomination to Sanders? It's not impossible, but it's not likely, either.

There was a time when voters didn't get any say in the Democratic nomination; the candidate was chosen by party leaders, take it or leave it. But after a violent 1968 protest over the nomination of Hubert Humphrey, the nomination was put in the hands of the voters. It didn't go well.

It seems that voters aren't always the best-equipped to choose a winning candidate, and primary voters aren't always representative of general election voters – many don't vote in primaries, particularly those whose states vote later in the election cycles, and states' rules differ about who's allowed to vote. For example, look at Clinton's recent win in New York, a closed primary state. Since only registered Democrats were allowed to vote, that left a lot of Sanders' Independent supporters without a voice. Based on these reasons, superdelegates were added to the mix via the Hunt Commission in 1981, according to The Washington Post.

The 712 party leaders who comprise the superdelegates are free to vote for whichever candidate they see fit, unlike pledged delegates, who must vote along with the people. And even though 540 of them have already come out with their endorsements (502 for Clinton and 38 for Sanders), they could conceivably flip at the last minute. In fact, the Sanders campaign may be counting on it. After the New York primary, Sanders campaign manager Jeff Weaver certainly seemed to imply it. "We're going to go to the convention," he told MSNBC's Steve Kornacki, according to Vanity Fair. "[I]t's going to be an election determined by the superdelegates." Weaver argued that the party wants a win, and Sanders has a better chance at beating Trump in a general election.

But in a Wednesday night appearance on The Rachael Maddow Show, Tad Devine, senior adviser to the Sanders campaign, stopped short of admitting that's their plan. Even when pressed repeatedly by Maddow, Devine would only say that he believes Sanders still has a chance at winning the nomination the old-fashioned way, although he confessed that it would be a "difficult task." He also advocated for superdelegates waiting until all the voters have had their say before committing to a candidate.

So is it really possible, as so many of the Bernie backers in your Facebook feed insist, that Sanders could flip enough superdelegates to win the nomination? Don't bet on it. While superdelegates can and have switched sides (Clinton infamously lost a handful of them to then-Senator Barack Obama in 2008), they've never gone against the pledged delegates, according to NBC News, and they've never changed the outcome of a race. Yes, Obama snatched up about 30 superdelegates that were formerly Team Clinton, but that was only after he'd overtaken her with both voters and pledged delegates.

It seems highly unlikely that the Sanders campaign can convince hundreds of superdelegates to go against their party in order to nominate a candidate that the majority of their voters didn't elect. And let's not forget that the polls still show Clinton beating Trump by a pretty decent margin. Maybe it's not as wide a margin as Sanders, but it's good enough. Superdelegates going against the party vote would be an unprecedented and alienating step that they simply don't need to take, and there's no reason to think that they will.