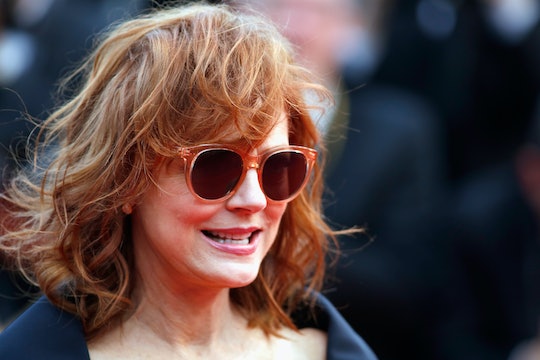 Now that the premise of the second season of FX's Feud has been revealed, it's time to play the fun game of figuring out who's slated to be in the ensemble cast. Given her stellar performance playing the iconic Bette Davis in the first season, it's possible that Susan Sarandon could return for Feud Season 2, especially when you remember that showrunner Ryan Murphy likes to recycle his favorite stars as often as he can. In the best way possible, obviously. For American Horror Story, it's fun to watch the same actors take on different personalities in different circumstances, just like watching certain sets of comedians (like the Judd Apatow crew or Tina Fey and Amy Poehlor in basically everything) work together over and over again with different scripts. Why fix what isn't broken?

Season 2 of Feud will focus on the legendary Princess Diana and Prince Charles and already there are rumors swirling that American Horror Story's Sarah Paulson will get to play "the People's Princess." That would be amazing casting — not just for Paulson's acting chops, but if you squint really, really hard, you can totally see Paulson as Princess Di. Given the theme and Murphy's penchant for using a clique of actors in his anthologies, there is bound to be a part for Sarandon, though absolutely nothing has been confirmed yet. And neither Sarandon or Murphy are talking, so don't get your hopes up just yet.

Kathy Bates joked about playing the Queen Mother at Paley Fest earlier this year, and while we'd totally be all over that, it's just as likely that Sarandon could take on the role. Either way, I sort of love, love, love the fact that this series is opening up a bunch of roles for women in Hollywood and that they're complex, twisty tales of some of the most interesting women in the world.

According to Rolling Stone, the very female cast and crew on Feud's first season was a draw for Sarandon and by all public accounts, the whole experience was worthwhile for both Sarandon and Murphy. She liked the idea that it wasn't just a role "imitating" Davis and Joan Crawford's relationship, but also exploring Hollywood culture. Working with fellow Hollywood vet Jessica Lange was also a selling point. Sarandon said:

We're both survivors in this business. And I'm always looking forward to working with other women — because that just doesn't happen that often. I mean I did Thelma and Louise, obviously, but this isn't the kind of thing that presents itself that often. And so I thought, okay, I'll jump.

Hopefully, if Murphy comes back with another role for Sarandon, she'll take the leap again. And while fans would love to see her on-screen, even a chance to direct an episode or two would be kind of cool. You can say a lot of things about Murphy and his anthologies, but the more jobs for women in Hollywood, the better.