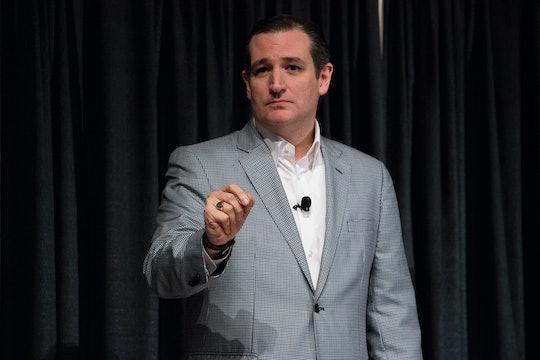 Will Ted Cruz Win Iowa? He Might Actually Have A Chance

With the Iowa caucus on Monday night, presidential speculation is reaching a fever pitch. Because of the non-stop media coverage, build-up, and supposed importance of the caucus as a sort of election augury, the event has become a textbook definition of a self-prophecy. The candidate who wins the Iowa caucus could have a good chance at winning the party's nomination, because the party can use the Iowa results to see which candidates have a real shot at winning the whole proverbial shebang. Donald Trump knows this, and he also knows the power of the bandwagon effect. No one wants to back a loser. As Iowans begin preparing to cast their support, however, it seems the tide may be turning. After all the Donald Trump hubbub, will Ted Cruz win Iowa? He might actually have a chance.

What Texas Sen. Ted Cruz has that Donald Trump does not is a solid history of being socially conservative. He may not have many friends in Congress, but he's popular among far right voters. In fact, in a Quinnipiac University Poll from last week, Trump only led over Cruz 31 to 29 percent. The more important statistic from that poll was that, among voters who identified as "very conservative," Cruz led by 20 points. NBC News reported that, according to entrance polls at the 2012 Iowa caucus, "very conservative" voters made up 47 percent of the Republican voters. Voters in the far right usually have very good voter turnout, so if Cruz has indeed captured that segment of the party, and if they venture out to caucus for him, he's got a real chance.

As for winning support from GOP leadership, Cruz may not be winning any Senate popularity contests, but he is a known commodity, unlike Trump, who is an establishment outsider. If Cruz makes a good showing in Iowa, it's likely he'll win the endorsement of more party leaders in an effort to turn supporters away from Trump. That said, The Washington Post reported that Cruz's reputation in Washington has made even Trump preferable to many influential GOP party members. He's the perfect combination of anti-establishment rhetoric and establishment experience for those voters looking for a change but who are freaked out by Trump.

His strengths also lie in his ability to galvanize the evangelical vote. Unlike Trump, Cruz has portrayed himself as a religious man. He's been playing that up in Iowa, which has a strong socially conservative voter base, and it may be enough to push him ahead of Trump. Even if he loses Iowa, he's likely to win other states in the Bible Belt shortly thereafter, which may jumpstart his campaign.

In a recent Politico piece, Cruz was cast as a tragic loser. He's put more money, time, and effort into winning Iowa than any other Republican candidate, so if he loses, he'll look more hopeless than anyone. He's put all his eggs into this one basket, and if it doesn't pay off, it's hard to say if he'll be able to rally so many resources again.

The Iowa caucuses are scheduled to begin tonight at 7pm Central Time, so place your bets now. The Des Moines Register will be posting results throughout the night.