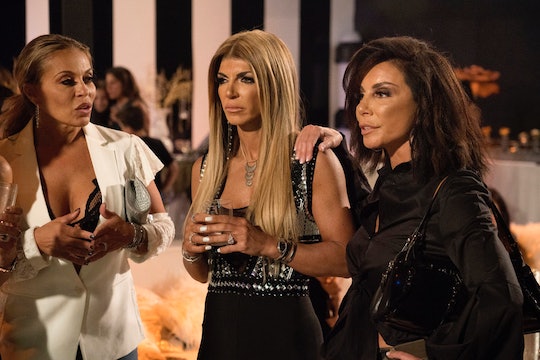 The Real Housewives of New Jersey family was dealt a devastating blow last October, when a judge ruled that Joe Giudice will be deported back to Italy once he finishes serving out his federal prison sentence. So fans are understandably wondering if Teresa will move to Italy if Joe is deported. The answer is obviously complicated.

During the last RHONJ reunion show, which aired in January of 2018, Teresa implied that she wasn't opposed to an international move, telling Andy Cohen, "I mean, Italy’s a beautiful place to live. I wouldn’t mind, you know, I’m just saying. Listen, whatever God has planned for me, that’s what’s going to happen. I will embrace it the best I can."

A few months earlier, Teresa stressed how important staying together as a family was to her in an interview with Entertainment Tonight, saying, "I want us to always be together. That's what life's about." She added, "[Joe] has to do the right thing when he comes home and better himself. That's what I did and I think that's what he should do, and we'll do it together, as a family."

But at the time when Teresa was fielding all these questions, the idea of moving to Italy was still a hypothetical. Now that a judge has ruled Joe must actually be deported, rumor has it there's some hesitancy on Teresa's part to uproot her family of four young daughters and her aging father.

On the record, Teresa has simply said that she's focused, along with her and her husband's attorneys, on appealing the judge's decision. Joe was given 30 days to file an appeal, and the couple's attorneys promptly did so. Unfortunately, the appeal has yet to be heard in court, so the family is stuck in a holding pattern for now. Joe is scheduled for release later this year.

"He’s very upset," Teresa said in an interview with People after the judge's ruling, adding that her daughters know the couple is fighting the decision. "They know I’m doing everything I can. So that’s it. That’s all I can do."

It's been suggested that the New Jersey Housewife could lean on her relationship with President Trump to help with her husband's case; he pair know each other from her 2012 stint on The Celebrity Apprentice. But Teresa assured People that her relationship with the president wasn't exactly of that nature.

Fellow cast member Margaret Josephs suggested that she could see Teresa living in Italy part-time, since the nature of her work is fairly international and she travels so much anyway. But a bi-continental relationship sounds pretty stressful, especially considering how much time with her parents Teresa already lost while she was incarcerated. My sense is that she wouldn't be willing to give up even more time with her dad, particularly when the devastating loss of her mother just a short while after her release is still fresh. It's possible that by the time the RHONJ Season 9 reunion show airs, there will be some more clarity around Joe's deportation and fans will have a more definitive answer about what the future holds from Teresa.