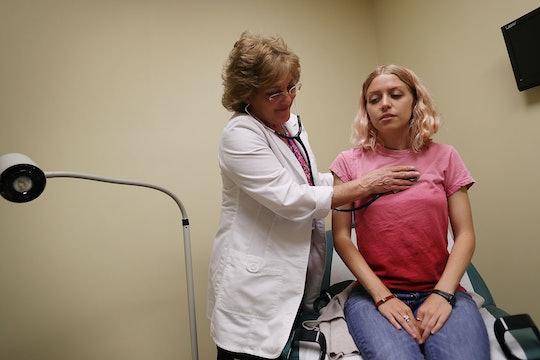 Will The 20-Week Abortion Ban Pass The House?

As Congress gathers on Capitol Hill with its fall legislative term back in session, it's another day, another assault on women's health care and reproductive choice. Up for a House vote Tuesday is H.R. 36, or the "Pain-Capable Unborn Child Protection Act," introduced by Arizona Rep. Trent Franks in January. Franks' bill would effectively criminalize abortion after 20 weeks into a woman's pregnancy, so will the 20-week abortion ban bill pass the House? Here's the bad news: It likely will pass in the House, where the Republican party holds a majority. But here's what's more disconcerting: The 20-week abortion ban bill has Trump's support. On Monday, President Trump said he would sign a 20-week abortion ban bill if were brought to his desk.

Update: On Tuesday afternoon, the House voted to pass the 20-week abortion ban bill 242 to 184. The bill will now move forward to the Senate for consideration.

Thankfully, the bill must win the support of both the House and the Senate (hooray for checks and balances!) and it's unlikely to pass in the Senate. The same 20-week abortion ban bill was introduced in 2013 and again in 2015, but failed both times when Senate Democrats voted down the measure. Even so, that the bill is getting a vote on its third time around the Capitol Building should have American women concerned about a federal attempt to restrict women's access to abortions.

The 20-week abortion ban bill is based on the anti-choice tactic of TRAP laws, or the targeted regulation of abortion providers. Roe v. Wade has protected a woman's right to choice, but it says nothing of the people who perform abortions. Here's the text of H.R. 36 that lays out the criminal offense:

This bill amends the federal criminal code to make it a crime for any person to perform or attempt to perform an abortion if the probable post-fertilization age of the fetus is 20 weeks or more.

Anyone who violates this proposed law would face fines, a prison term of up to five years, or both. This seems totally reasonable to put doctors in jail for just, you know, doing their jobs. For a party who touts small government and deregulation, they sure do want to stuff as many laws as possible into private medical decisions between doctors and their patients.

Dr. Anne Davis, the consulting medical director for the watchdog group Physicians for Reproductive Health, came out strongly against H.R. 36, noting in a statement that "medical decisions move out of the hands of medical professionals and pregnant people when abortion care is needed."

Even though it's unlikely that H.R. 36 would become federal law, similar TRAP laws in the form of 20-week abortion bans already exist on the state level. As of Oct. 1, 17 states have laws that restrict abortions after 20 weeks, according to the Guttmacher Institute. What's even more infuriating is the perception that there's this tidal wave of abortions that need to be stopped: In truth, the World Health Organization and the Guttmacher Institute have found that abortion bans do nothing to reduce abortion rates; instead, bans make abortions more unsafe for the women who still need them.

Beyond the obvious legislative overreach of a federal late-term abortion ban, it's especially problematic that Republicans have crafted this bill without any established scientific basis on the existence of fetal pain before the third trimester — and that's because there is none. The bill's title is not only misleading, it's just factually incorrect. Again, for a party so bent on tamping down the "fake news media," perhaps they should take another look at how they write their own legislation.

Last time I checked, when I went to the doctor, I didn't need to ask my congressperson for their permission first — and this practice of interfering with women's health care shouldn't become federal law, either.

More Like This
New York Can End Religious Exemptions to Vaccine Mandates, Says A Federal Appeals Court
Nebraska Authorities Used Teen’s Facebook DMs To Charge Her & Her Mom In An Abortion Case
A Teen Was Body-Shamed By Matt Gaetz. She Raised Over $700,000 For Abortion Funds.
Breonna Taylor's Mom Spoke Out About The Four Officers Arrested In Her Daughter’s Death