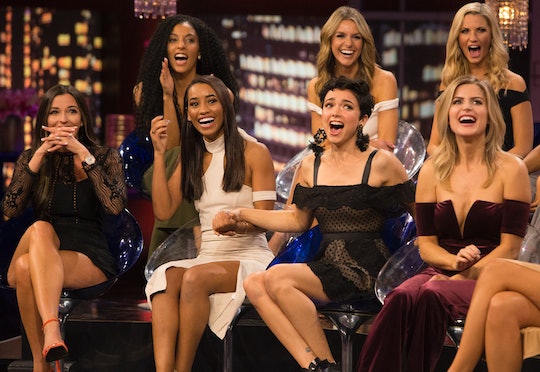 The 2018 Bachelorette Will Most Likely Be From Arie's Season, But That's Not A Bad Thing

Arie's season of The Bachelor is winding down to the finale — or perhaps gearing up, depending on what the much-discussed shocking twist will be. And now that "Women Tell All" has aired, providing a generous launchpad for potential followup Bachelorettes, fans are wondering: will the 2018 Bachelorette be from Arie's season? Many viewers considered this season's "Women Tell All" to be nothing more than a glorified Bachelorette audition for Tia and Seinne, but the show has thrown us curveballs before.

The last two Bachelors have been conceit-defying picks from seasons long past, instead of a scorned lover from the most recent season of The Bachelorette. Arie was a contestant on Emily Maynard's season way back in 2012, and although he was pretty charming on it, reaching so far back for a suitor confused the show's fanbase, the bulk of which is made up of more recent devotees. Before Arie, there was Nick Viall, another out-of-sequence pick, who was first seen on Andi Dorfman's season of The Bachelorette. But his turns in the franchise happened much more recently than Arie's, and he also appeared on Bachelor in Paradise right before taking over as The Bachelor. His time on BiP really helped shape his redemption narrative and by the time he was named as the Bachelor, fans of the show were rooting for him again.

So it's possible — and dare I say, likely — that the 2018 Bachelorette will come from Arie's season, but the show could still throw us the first Bachelorette curveball. The frontrunner in the throwback pool seems to be Kristina Schulman, alum of Nick's season who went on to hit it off with Dean Unglert in Paradise, only to be dumped because their connection was... too good? Yeah, Dean had a lot of stuff to figure out, but Kristina really won people's heart's with her moving story of being born to an impoverished single mother in Russia, living in an orphanage until she was 12, and then being adopted and adjusting to life in the States as an adolescent. Being dumped by two dudes who couldn't seem to handle her really endeared her to, well, basically every woman alive and she has a lot of people rooting for her.

Meanwhile, in the mix from Arie's season are his final four: Lauren, Kendall, Becca, and Tia. Tia and Kendall have already been eliminated and are decent contenders for next season, if completely opposite ones. Tia is a very traditional Bachelorette pick: Southern girl who's climbing the walls to get married with a string of bad boyfriends and a tragic ending to her time on The Bachelor. She felt blindsided and betrayed when Arie dumped her while keeping Kendall, someone comparatively unready for marriage. Kendall, on the other hand, is a super atypical Bachelorette pick, but that's sort of what would make her so special and interesting. Plus, her pool of guys would be unlike anything we've ever seen on The Bachelorette.

Becca and Lauren sort of seem like the most uninteresting choices, so whoever Arie doesn't pick probably won't gather enough steam to land herself on The Bachelorette. Seinne, the Yale graduate who got dumped in Tuscany just before hometowns is another strong contender, as is Bekah, who might make her free-spirited, empowered, braless brand work for a radical new age of The Bachelorette. We have a good long while to go until the announcement is made, so feel free to speculate with wild abandon. Literally anything is possible after Arie Luyendyk, Jr.!

More Like This
'Yellowstone' Has An Exciting New Cast Member For Season 5
'Firefly Lane' Is Coming Back To Netflix For One More Final Season
10 Kid-Friendly Halloween Episodes From TV Shows Your Little Vampire Already Loves
'The Proud Family: Louder & Prouder' Is Returning For Season 2 On Disney+