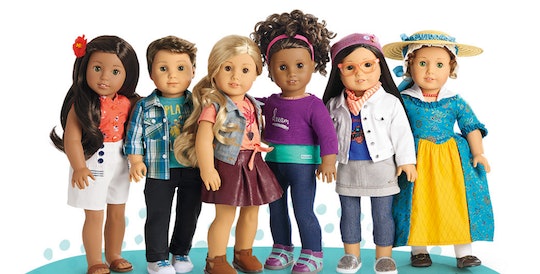 The American Girl Boy Doll Is On Its Way

American Girl fans, rejoice! The toy company is coming out with a whole bunch of new dolls, and this time, they're doing things a little differently. The biggest change is that, for the first time ever, American Girl is offering a boy doll. But will the American Girl boy doll be available online? He's not up there yet, but don't worry. The company is not going to unveil a boy doll, and then not let you buy it online.

American Girl's game-changing boy doll is named Logan Everett, and he's a drummer from Nashville. He's friends with another new doll, Tenney Grant, a songwriter "finding the heart to be herself," and they play music together. They're not boyfriend and girlfriend, but also... probably a bunch of kids across America are going to make these two fall in love.

The American Girl website says, "Tenney and Logan challenge each other as musicians, and their partnership teaches girls the importance of being open to collaboration and compromise." As New York Magazine points out, he sounds an awful lot like your ex-boyfriend, or a character from Nashville. (Seems like a whole new generation of girls are destined to develop a strong, seemingly inexplicable preference for the "brooding musician in plaid" type when they get older.)

Logan will be available for sale on Feb. 16, so keep that American Girl website bookmarked.

Logan arrives after American Girl has faced criticism for lack of diversity in doll selection. It seems that people have been wanting a boy doll for a while now, with American Girl spokesperson Julie Parks saying in a statement, "A boy character has been a top request from our fans for decades. We do an enormous amount of research with girls and their parents, and the one thing we've heard loud and clear is a desire for more—specifically more characters and stories from today—with more experiences, more diversity, and more interests."

Logan isn't alone in bringing more diversity to the American Girl line. The newest doll to be named "Girl of the Year" is Gabriela McBride, an African-American doll who loves spoken word poetry. There's also a Korean-American doll, Z Yang, and a still-to-come Hawaiian doll, Nanea.

And in other news that will be exciting to children of the '90s, spunky Colonial redhead Felicity is back! Yes I did own the Felicity cookbook, and threaten to make my family do a Colonial Day where we somehow had to cook everything in it without using electricity.

It's a good day to be an American girl (or boy).

More Like This
Kids With Head Lice Don't Need To Miss School, AAP Stresses In Updated Guidelines
McDonald's Halloween Buckets Are Coming Back To The Delight Of Every '90s Kid
The White Lotus Is The Perfect Treat For After The Kids Go To Bed
Reese Witherspoon Doesn’t Think Her Daughter Looks That Much Like Her