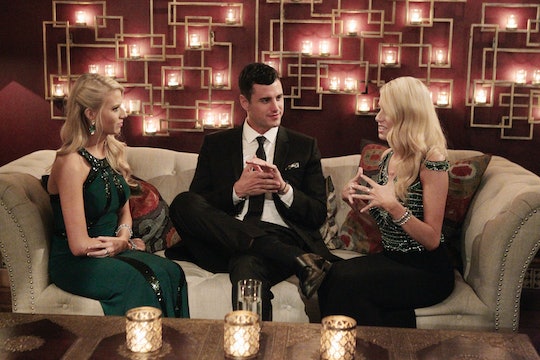 Will 'The Bachelor' Twins Go On Dates Together? There Might Be A Few "Group Dates"

Identical twins carry a connotation of "every man's fantasy," unfortunately, and The Bachelor, as a steamy romance show, is continuing to promote the fetish. But will The Bachelor Ben Higgins date both twins, Haley and Emily Ferguson, during season 20, fulfilling the ridiculous twin fantasy? The show's host, Chris Harrison, told Yahoo! TV Higgins won't date the the twins together.

Remember when Ben first saw the twins come out of the limo during the show's premiere Monday night? He did a double take as Emily, the more outgoing of the twins, was soon followed by her identical twin sister, Haley. "No way!" Ben said in the promo trailer before asking for a "group hug," according to Moviefone.

There is a rumor that, accompanied by other contestants, Ben and the twins go on a group date within the first few episodes of the show, according to The Inquisitr.

In fact, Ben told ABC News that viewers shouldn't expect to see a lot of steamy action between him and any of the ladies this season. "I wanted to make sure that we spent our time getting to know each other," he told ABC. Ben goes on to say he doesn't spend a lot of time "kissing or making out. It was something I wanted to hold back from."

Given his reluctance to get raunchy in front of the camera, maybe The Bachelor hopes the strangeness of twins competing against each other for a man's affection will draw more viewers. People have certainly responded on Twitter.

Rumors also have it that the twins are looking for fame more so than they are looking for a husband. The 23-year-old twins work together as cocktail waitresses at Marquee in the Cosmopolitan Hotel. According to Celebrity Dirty Laundry, "This is actually not their first stint on reality television — they tried out for the Dallas Cowboys cheerleading squad and were featured on the CMT reality show about the Cowboys cheerleaders."

But just for fun, let's just imagine how a date would go with Ben and the twins. He whips out a pack of gum:

Just for the record, I can't imagine dating the same man as my sister, especially on national TV. Like, this is more appealing:

To each her own, I guess.