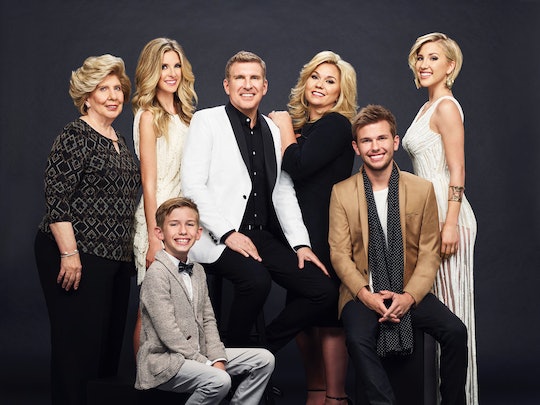 Fans started following Todd and Julie Chrisley when their show, Chrisley Knows Best, premiered on USA in 2014. From palatial mansions to fancy cars, the couple has been living a glamorous lifestyle in their hometown of Nashville, Georgia, but it looks like things are about to change. The reality stars are facing serious legal troubles, and the severity of the charges against them have many wondering if the Chrisleys will go to jail.

On Aug. 13, Todd and Julie were indicted by a federal grand jury for financial crimes by the Northern District of Georgia, reported CNN, with the 12-count indictment including charges of wire fraud conspiracy, conspiracy to commit bank fraud, tax evasion, and aiding the filing of false tax returns. In a statement to Fox News, Todd’s attorneys, Stephen Friedberg and Bruce H. Morris said “the Chrisleys are innocent of all charges” and claimed the allegations in the indictment “are based on complete falsehoods.”

Neither USA Network nor representatives for the Chrisleys immediately returned Romper's request for comment.

While it’s too early to know what the outcome of their case will be, it’s safe to assume that the couple could face potential jail time if found guilty. In a press release from the United States Attorney’s Office for the Northern District of Georgia, U.S. Attorney Byung J. “BJay” Pak said the Chrisleys are facing serious criminal charges. “Todd and Julie Chrisley are charged not only with defrauding a number of banks by fraudulently obtaining millions of dollars in loans, but also with allegedly cheating taxpayers by actively evading paying federal taxes on the money they earned,” said Pak. “Celebrities face the same justice that everyone does. These are serious federal charges and they will have their day in court.”

As reported by CBS News, in an Aug.13 press conference, Pak acknowledged the Chrisleys' celebrity status and confirmed his office intends to seek prison time. "It's clear that Mr. and Mrs. Chrisley were starring in a TV show and they were compensated handsomely as a result," Pak said. "That money was hidden from the IRS — Just because you're rich and on a TV show doesn't mean that the law is not going to come get you when you commit a federal crime."

As per the U.S. Attorney’s Office press release, “the indictment only contains charges” and the Chrisleys “are presumed innocent of the charges and it will be the government’s burden to prove the defendants’ guilt beyond a reasonable doubt at trial.”

In a lengthy Instagram post, Todd claimed that he and Julie were framed by a disgruntled former employee, and insisted they are innocent. “We have nothing to hide and have done nothing to be ashamed of,” he wrote in the post. “Not only do we know we’ve done nothing wrong, but we’ve got a ton of hard evidence and a bunch of corroborating witnesses that proves it.”

With this indictment, the Chrisleys have a long legal battle ahead of them, and the only thing fans can do now is wait and see how their court case plays out.