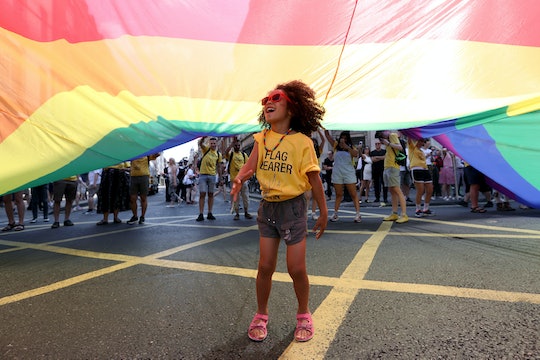 The Equality Act Passed In The House, But Faces A Difficult Challenge In The Senate

Important legislation protecting the LGBTQ community made its way through the U.S. House of Representatives on Friday. The bill, dubbed the Equality Act, would protect LGBTQ people against discrimination in a variety of places, including housing, the workplace, public accommodations, and more, according to The New York Times. This bill is no doubt exciting, and vital, in the current political climate, but as it begins making headlines, it's fair to wonder whether the Equality Act will pass in the Senate as well.

The Equality Act isn't new; it was first introduced in 2015, according to Vox, but has been expanded to include public accommodations protections to prevent discrimination based on gender, strengthen existing protections, and ensure places like retail stores and banks are covered. Additionally, according to Human Rights Campaign, the Equality Act "would amend existing civil rights law," as there are currently no federal laws that explicitly protect LGBTQ people from discrimination.

The House — currently controlled by Democrats, according to the Economist — passed the legislation on Friday, May 17, as The Week reported. Now, though, the Equality Act must also pass the Republican-controlled Senate before it becomes law, and this may seem like an impossible feat, given the general negative stance on LGBTQ issues among the party, as noted by New York Magazine.

But, all hope is not lost; there are some senators who are more likely to vote yes on the Equality Act than others, and there is certainly a lot of passion and support behind the legislation.

Conservatives have, however, made no secret about their feelings toward the Equality Act.

For instance, Debbie Lesko, of Arizona, said in an op-ed published in the Daily Signal on Thursday the bill is "radical," and claims that it will see that women's sports are eliminated. And Rep. Vicky Harzler, of Missouri, said in a press conference held in response to the bill that it was more of an "inequality act," according to the National Review, claiming that it "hijacks the Civil Rights Act of 1964."

The Senate is currently focused on confirming President Donald Trump's judicial nominees, and rarely takes up legislation, according o the Washington Blade, which also reported that the Senate is even less likely to consider a bill that was approved by the Democratic House. Making matter even more grim, a spokesperson for Sen. Mitch McConnell told the Washington Blade that Republican leadership in the Senate had "no scheduling announcement regarding Senate action" on the Equality Act at this time. All of this suggests that theres, unfortunately, little chance the bill will make it through — at least right now.

The bill was introduced by Rep. David Cicilline, a Democrat from Rhode Island, and has 240 co-sponsors, according to Reason. Nearly every Democrat in the House supported passing the Equality Act, according to TIME, with a final vote of 236-173.

Ahead of today's vote, some Republican lawmakers had proposed a "compromise" bill that would include some exemptions for religious individuals as well as related institutions, according to BuzzFeed News. But it's clear the majority of the bill's supporters want it to stay as is and many have taken to Twitter to share their support of the important legislation.

Rep. Jan Schakowsky of Illinois wrote on Twitter, "As the proud grandmother of a young transgender man, I will not stop fighting until he is granted equal recognition and treatment under the law. He, like all people, deserves a fair chance to obtain and education, find housing, and support himself and his loved ones."

Rep. Ann Kirkpatrick shared on Twitter on Friday, "No one should ever lose their job or be denied opportunities because of who they love. Our LGBTQ+ brothers and sisters deserve the same protections as everyone and I will always vote and fight with them in mind and heart."

Sen. Bernie Sanders of Vermont penned a tweet directed at U.S. Senate Majority Leader Mitch McConnell: "The House did its job. Now, I call on you to bring the #EqualityAct to the Senate floor so that we finally protect LGBTQ people across America from discrimination in housing, employment and other critical parts of their lives. Do your job."

And Rep. Jennifer Wexton of Virginia wrote, "the #EqualityAct would ensure all Americans — no matter who you love or how you identify — are equal under the law. We're one step closer to realizing the fundamental promise of this nation that all Americans are created equal. This is a truly historic moment."

The Equality Act is, and always has been, a necessary piece of legislation. It's possible that it may not pass through the Senate at this time, under this administration, but its backers must continue to fight to see that it eventually makes its way into law. The LGBTQ community must be protected in every venue from discrimination of any kind, and without laws explicitly forbidding that type of behavior, seeing they get the treatment they so desperately deserve is next to impossible.

This fight will continue, as it has since the bill was first introduced. I have no doubt about that. And if you want to do your part, don't hesitate to call your senator and urge them to support this vital piece of legislation.