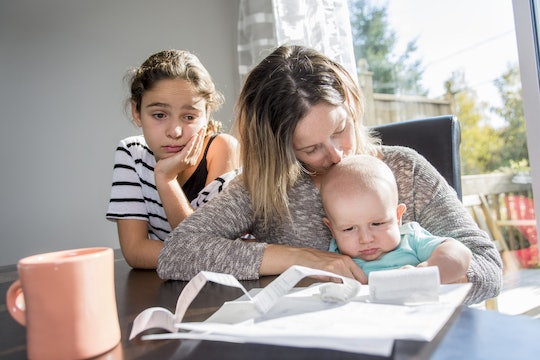 As hundreds of thousands of federal workers feel the crunch of the ongoing government shutdown, many are seeking additional employment, emergency support, and even heading to soup kitchens during this tough time. Another payday has come and gone without change, and single parents reliant on federal pay may be wondering how the government shutdown will affect child support. When there is no paycheck to pull from, child support payments simply aren't, or can't be, made — yet another financial implication of the lasting stalemate between President Donald Trump and Congress.

An estimated 800,000 federal employees are impacted by the current government shutdown, with roughly 420,000 of them being forced to work without pay for the duration of it, according to TIME. When the government failed to reach a number of deals to reopen this week, according to CNBC, these federal workers missed another paycheck. On top of mounting bills dwindling their savings, those federal workers with child support payments to make — and the other parents who depend on those payments — are feeling the crunch.

President Trump has signed a bill promising back pay for federal workers once the government shutdown ends, as The Hill reported, but that does little to relieve the burdens placed on the workers who have gone more than month without pay and the families who depend on them.

Parents are indeed still required to pay child support while the government is shut down, according to Marketplace. But without wage garnishments automatically withdrawing money to allocate for child support, parents may fall behind on their payments, as CBS News reported. This means that the parties expecting the payments to be pulled automatically will go without this financial support unless unpaid federal workers continue to make the payments on their own.

Abel Hinojosa, a family attorney based in Texas, told Circa that it is in everyone's best interest to keep making child support payments throughout the shutdown, if possible. “If you don’t pay the child support, it will keep on accumulating; it does not disappear,” Hinojosa told Circa.

However, he added that cases will differ by circumstance: "Do you have means to borrow the money, do you have reasons to sell anything to pay the child support? If the answer is 'no,' your defense is inability to pay the court-ordered amount."

Fortunately, according to the U.S. Department of Justice, "child support enforcement issues are handled by state and local authorities, and not by the federal government," so those who work for child support agencies are still working — and still getting paid, according to Support Pay. They are your greatest resource when handling child support payments or issues during the shutdown.

Despite the mounting pressures being put on a large segment of the population, Trump has advised workers to look forward to the "safety net" of "having a strong border because we're going to be safe," according to CBS News. In reference to the missed paychecks, as CBS News reported, Trump said:

This really does have a higher purpose than next week's pay. And the people that won't get next week's pay or the following week's pay, I think if you ever really looked at those people, I think they'd say, "Mr. President, keep going. This is far more important."

With an ongoing gridlock and no end to the costly shutdown, child support payments — or the lack thereof — are only one of the numerous burdens that the public is left bearing.