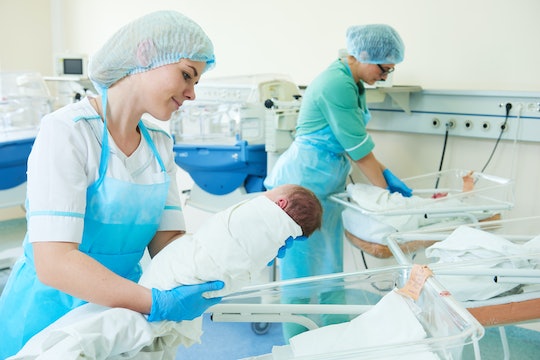 You Might Feel Pressured To Circumcise At The Hospital, & Here's Why

In their policy statement on circumcision, the American Academy of Pediatrics (AAP) advises hospitals to provide unbiased information about the procedure, and then let parents make the final decision. In real life, though, what does this look like? Are staff really unbiased, or will hospitals pressure you to circumcise? They're definitely not supposed to, and physicians don't necessarily care, but the long history of hospital circumcision in the U.S. means that it's still considered the status quo. While you're not likely to be explicitly pressured into circumcising your son, it's up to parents to inform themselves about their options.

According to Ashley Trueman of Your Whole Baby, the U.S. stands alone in its attitude towards in-hospital circumcision. Though rates of hospital circumcision are steadily declining across the nation, as the Centers for Disease Control and Prevention (CDC) reported, nurses and doctors working today were primarily educated with textbooks that don't contain many pictures of life with foreskin, she tells Romper. As a result, those providers tend to consider circumcision to be the norm, and parents might assume they have no other choice. That in itself can be felt as a form of pressure, says Trueman, and it's not the only way such subtle pressure manifests.

For instance, some OBGYNs or midwifery practices will have a delivery fee parents must pay in advance. "What we see happening — and it’s not rare, I’d say — is that circumcision is lumped in with a pre-delivery fee, and the default is that it’s included," Trueman explains. When parents say they don't want to pay for the circumcision, they might be told it has to remain that way, "in case they change their mind."

In addition, Trueman has seen hospital forms that provide just two possible answers to the question, will you be circumcising? The first box says simply, "Yes." The second box says, "I need more information about circumcision." For Trueman, this makes it seem like a definitive "no" isn't a valid choice in its own right.

"Another form of pressure is that [circumcision] is offered in hospitals at all," says Trueman, and in the way the option is phrased. According to Trueman, the question will you be circumcising, is very different from, will you be keeping them intact? "As a sales thing, when there’s a power imbalance ... it’s easier to say yes to questions than it is to say no. It can be seen as, 'would you like fries with that?'" Trueman explains.

Trueman's final example of hospital pressure towards circumcision is more serious. In one court case, 18-year-old William Stonewell sued the hospital that circumcised him as a newborn after his mother signed a consent form under the influence of post-Caesarean painkilling drugs. "So we also see that the questions are being asked when women are exhausted, or under the influence of drugs they had during labor," says Trueman.

While you shouldn't feel frightened that hospitals will consciously try to pressure you into circumcising your child shortly after birth, you should gather your opinions in advance, and communicate them with providers well in advance. Because the issue is such a controversial one, parents can actually feel pressure from both directions, notes Deena Blumenfeld of Shining Light Prenatal Education in an email interview with Romper, and from friends and family more than from providers. "Physicians are really ambivalent about the issue, and this is because it is a fully elective procedure where parental preference should be respected either way," she observes. It's most important that you talk to your care provider prenatally, and put your choice in your birth plan, if you're writing one, she says.

In any medical situation, you have the right of informed consent, and informed refusal, according to Blumenfeld. She encourages parents to take a prenatal education course to have the best experience in the hospital. "Parents also need to know that the [circumcision] decision is theirs alone and that there is no one right choice," she says. "Whatever they choose, it will be right for their son."