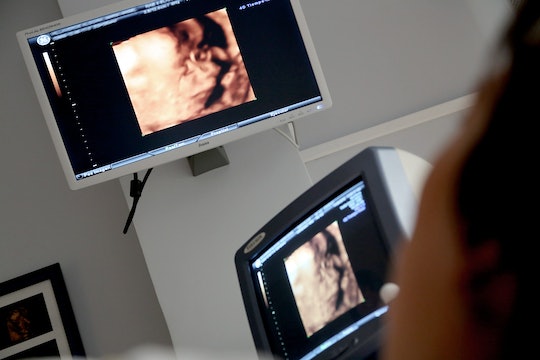 Will The Life At Fertilization Bill, HR 586, Pass?

The federal government, in keeping with its propensity to create legislation that aims to intensely control reproductive health and reduce the choices people can make about their own bodies, has introduced a new bill to the House of Representatives. HR 586 would, essentially, legally define life as beginning at fertilization — an effort that would boost the anti-choice and anti-science agendas of legislation like the Heartbeat Bill. But will the life at fertilization, or "personhood" bill, H.R. 586, pass? It's hasn't been widely supported on Capitol Hill, but at this point, anything's possible.

This is hardly the first time conservative politicians have introduced so-called "personhood" laws into Congress. The ultimate goal of these laws is to criminalize abortion, leaving no room for exceptions, and also ban various types of contraception. When Roe v. Wade was passed, it not only legalized abortion but specifically outlined that the fetus was not to be considered a person, and therefore, attempts to regulate any kind of contraception or reproductive healthcare couldn't be done on the basis of fetal personhood. As attempts have been made to reverse many of the measures outlined in Roe v. Wade, the undermining of personhood has been a common strategy employed by mainly conservative politicians who want to appeal to anti-choice constituents.

This latest piece of legislation that aims to define the personhood of a fetus at the point of fertilization was introduced by Rep. Jody Hice of Georgia, and is clearly intended to end "the plight of abortion" in America. It's been co-sponsored by 20 fellow Republicans, and may be particularly capable of gaining traction in the overwhelmingly white, male, conservative, self-proclaimed anti-choice Trump Administration.

While the sponsors of the bill may feel as though they have science on their side by citing biological processes like fertilization, the truth of the matter is that science is — if anything — not on their side. Defining fetal personhood at the moment of conception is, not just from a scientific standpoint, absurd. Fertilization occurs prior to implantation, the point at which a zygote — not yet even a fetus — would be considered viable. In fact, the zygote then must survive long enough to be considered a blastocyte, which is essentially an undifferentiated ball of cells. The blastocyte eventually develops into an embryo, which will one day, perhaps, become a fetus. In other words, there are weeks (at least eight, in fact) between fertilization and what actually constitutes a fetus.

Essentially, there's no logic in saying that fetal life, and therefore personhood, begins before a product of conception is scientifically referred to as a fetus. While it might be tempting to pick and choose the biological processes that support one's political argument, you can't ignore the rest of the facts just because they do not.

While it's unlikely that H.R. 586 will garner a heap of congressional support, as bills like it have also failed to do in the past, it's not out of the realm of possibility. There have been continued attacks on Roe v. Wade, and its provisions, as well as the provisions of the Affordable Care Act that are to do with supporting reproductive health. Not to mention that one of President Trump's first acts in office was to sign a ban on any federal money being given to international groups that so much as suggest abortions as a possibility to women for their health.

To say a bill like H.R. 586, or one like it, could not pass would be short sighted. The truth is, with conservative and vocally anti-choice leaders in the highest rungs of the U.S. government, it's certainly possible. It may not be imminent, but it shouldn't be considered impossible, which is why the time to contact your representatives and voice your vehement opposition to the bill is right now.