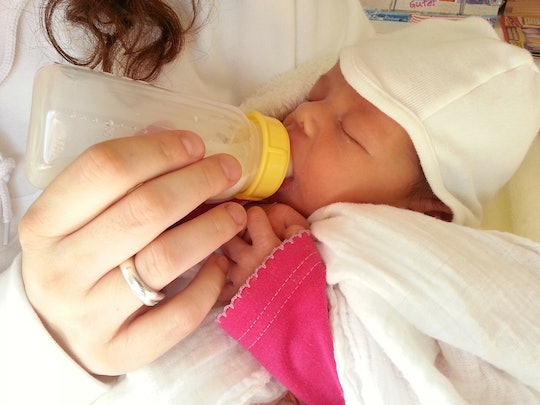 The House of Representatives took the first step in rolling back the Affordable Care Act on Thursday, when they narrowly voted to advance the American Health Care Act, a plan that provides far less coverage than the original. Women's health care is particularly endangered by the bill, and some may wonder if the new Trumpcare will cover breast pumps, like Obamacare does. While the bill will likely go through several more revisions before the Senate votes on it, the current text of the bill, H.R. 1628, implies that it will not.

Under the ACA, preventive services were covered with no copay or deductible, and it specifically defined preventive services for women to include birth control and breast pumps, among other things. The new AHCA, as it stands, makes no reference whatsoever to contraception, lactation, or even women at all. It also does not define preventive or essential services, and even if breast pumps were considered to fall under that umbrella, the plan also permits states to obtain waivers that would eliminate the requirement for insurance companies to provide essential health benefits on individual plans. Insurance companies could also charge more for patients with pre-existing conditions, and yes, pregnancy would definitely count.

A quality breast pump can cost several hundred dollars, which is out of reach for many people, particularly those with individual insurance plans, who might be unemployed or self-employed, and therefore have a less reliable source of income. And while some mothers choose to pump for convenience, it's an absolute necessity in many cases; some premature babies or those with other medical conditions can't latch on to a breast, and if a mother works outside the home, she won't be available to breastfeed for hours, which is not only impossible for the baby, but painful for the mother. Oh, and by the way, that Obamacare mandate for dedicated breast pumping rooms at work? Also gone.

The latest healthcare proposal would allow states to apply for waivers to opt-out of essential health benefits, which include breastfeeding, maternity and newborn care. What many don't realize is that the U.S. is ranked 49th in the world in maternal mortality rates, behind all developed and some developing nations. The U.S. is also ranked 36th in breastfeeding policy in the world. It's not an area where we can afford to take a step backward, and while there's an argument for not forcing men to pay for services they won't need, it's hard to justify that. How can we when everyone alive today came from the reproductive organs of a woman?

The new health care plan, in it's current state, is virulently anti-woman. It won't guarantee birth control or breastfeeding support, and it specifically threatens and insults low-income women on Medicaid by forcing them to search for a job just two months postpartum, and by prohibiting them from utilizing the services of any health care clinic that provides abortions. Not just abortion services — any services. And yet 199 men and 18 women who are bound to represent the interests of their fellow Americans have voted it through. Each and every one of them are up for reelection in 2018. Let them know what you think of their decision.

More Like This
30 Marvelous Baby Boy Names That Start With “M”
53 Rainbow Baby Names Filled With Hope
"Crybaby Ambulance" In Europe Will Help Exhausted Parents
How Hot Is Too Hot For Babies? Experts Weigh In