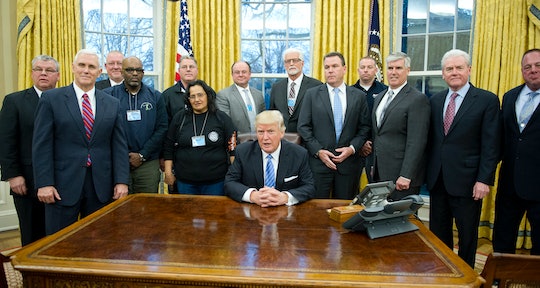 Will The Next ACA Replacement Exclude Maternity Care?

The American Health Care Act's disastrous failure was welcome news to millions of Americans, especially women. That's because a later version of the bill excluded requirements for insurance plans to cover women's health care services, including maternity care. But since the Trump Administration will likely try to continue to replace Obamacare, questions still remain about what the next bill will look like. So will the next Obamacare replacement exclude maternity care?

The Trump Administration was criticized for a picture posted to social media that showed all-male lawmakers discussing cuts in women's health and maternity care to lower the AHCA's cost. But the Trump Administration was willing to do more than cut back on these services — they were willing to eliminate them entirely. Knowing that the bill wasn't popular even among Republicans, the Trump Administration was willing to repeal Obamacare's "essential health benefits," in order to appeal to the Freedom Caucus, a far-right wing group of Senators who wanted a more conservative bill that would lower costs even further. This means that if the bill had passed, insurers wouldn't be required to include maternity care in their plans.

So what does that mean for the next health bill from the Trump Administration? Well, there's a decent chance that Trump will need to work with the Freedom Caucus to come up with a more conservative health bill, which is scary to anyone who wants maternity coverage, prescription drug coverage, and mental health services left on the table. A study by healthcare cost-analysis firm Milliman on the AHCA showed that premiums on plans with maternity benefits could cost up to 70 percent more than ones that don't have them. So if the next bill does get rid of essential health services, new moms could pay $15,000 out-of-pocket for prenatal and delivery services.

“Members of the Freedom Caucus are committed to their constituents and their conservative values. If President Trump was not aware of their resolve before, he is now,” Alice Stewart, a former strategist on Texas Sen. Ted Cruz’s presidential campaign, told Bloomberg News.

But there is also the possibility that President Donald Trump could choose not to compromise with the Freedom Caucus and instead seek Democratic support in order to pass a new health bill. Democrats refused to support the bill because it would leave too many Americans uninsured and because it wouldn't cover essential health services, so if Trump chooses to takes this path, there is a good chance the Trump Administration would keep maternity coverage in order to compromise with Democrats.

"Trump is now looking to work with Democrats to get health care done…Now, any health care reform will be less ambitious, less conservative," an unnamed senior House Republican told Politico.

If that does happen, that could be a good sign for the 6 million women who will become pregnant each year of Trump's presidency.