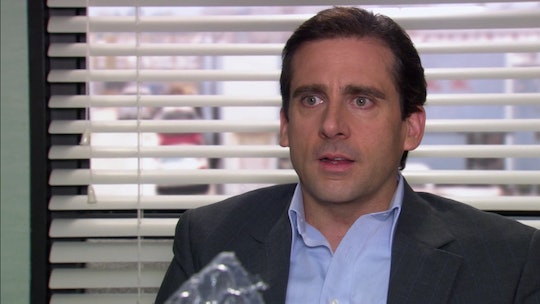 Here's How To Watch 'The Office' After It Leaves Netflix

While selling off the rights to their wildly popular television shows was once a lucrative move for TV networks, the rise of streaming platforms has come to threaten their very existence. So, many networks are developing their own streaming platforms and taking back their most coveted titles, for better or worse. It was announced earlier this year that The Office would be leaving Netflix in 2021, prompting everyone who streams it as soothing background TV to wonder if The Office will be on NBC's streaming service. Peacock, as the new platform will be called, will launch in April 2020, according to Deadline, but viewers will have to wait a bit longer for The Office to be available on it.

In June, it was announced that The Office would be leaving Netflix in 2021, according to Vulture, for NBCUniversal's then-unnamed and yet-to-be announced streaming platform. NBCU had been hinting that it was interested in regaining control over the series once its streaming deal with Netflix was up, and, last summer, the news became official. NBCU spent more than $500 million reacquiring The Office for five years beginning Jan. 1, 2021, per Deadline. It's not surprising that NBCU wanted the show back, considering a 2018 report from NBC revealed that the series had been streamed for 52 billion minutes.

"We're sad that NBC has decided to take The Office back for its own streaming platform," Netflix wrote in a tweet, "but members can binge watch the show to their hearts' content ad-free on Netflix until January 2021."

That little "ad-free" comment was perhaps a reference to the fact that NBC has yet to announce a pricing structure for its upcoming platform. Fellow network broadcasters like CBS have launched similar platforms at different price points, some of which include ads. It's unclear whether NBC will do something similar, but of course, Netflix's claim to fame here is that it has always been ad-free.

Peacock, however, does have other big plans. It also plans to host Parks and Recreation, movies from its studios, and an intriguing list of new reboots. The confirmed reboots are Battlestar Galactica, Saved By the Bell, and Punky Brewster, all which sound like they could either be good or be really, really tragic. And in fact, The Office is in talks for a reboot, too. This is perhaps ironic considering The Office, in itself, is a reboot of a British TV series. But one look at Steve Carell's lengthy Saturday Night Live bit about bringing the show back proves The Office fans would love to see more.

“It is my hope and goal that we do an Office reboot,” Bonnie Hammer, NBCU's Chairman of Direct-to-Consumer and Digital Enterprises, told Deadline on the day of Peacock's announcement.

Whether fans are willing to add yet another streaming service to an already annoyingly long list they need to watch their favorite shows remains to be seen. My guess is, streaming sign-up fatigue is going to become very, very real in the next few years.