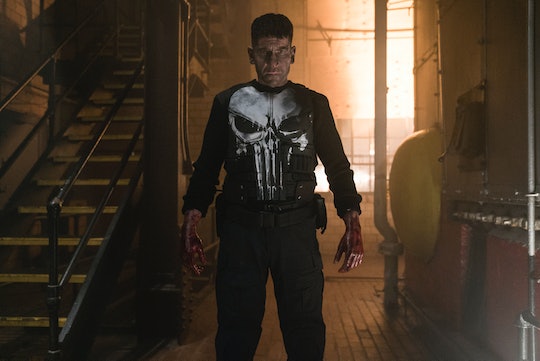 Fans Are Already Craving More Of 'The Punisher'

The first season of The Punisher is finally here and many fans are already clamoring for the second season. So will The Punisher return for Season 2? Even though it's a bit early to call, I'd say there's a good chance fans will be seeing more of Frank Castle in the future.

The debut season of the anti-hero's own show was presented in a cloud of mystery. Rather than tell fans when the season would be released, Netflix kept that secret under wraps. Instead fans were left to wonder when the Punisher would come to collect and grace them with his presence. The only thing streaming service guaranteed was that the show would premiere sometime this year, but since the second trailer for the series was released back in September, that left a lot days open. Thus, it's not surprising that they haven't revealed whether or not the show will be renewed yet. It's clear Netflix likes to keep news about The Punisher close to the vest. (Frank Castle would be very impressed.)

And it's a strategy that's working pretty well. Despite not knowing what day the show would arrive, fans are just as eager for more. Frank was first introduced in Daredevil Season 2 and people have been waiting for him to get his own series ever since. But because the Marvel Netflix schedule is so packed, fans had to wait over a year to see the Punisher get a series all about him. Even so, most would agree it was worth the wait.

During Daredevil, Frank was focused on getting revenge for the deaths of his wife and children, and by the end of the second season he had. Now, similar to Daredevil and the other New York City vigilantes, he's determined to rid NYC of criminals, by any means necessary. Except, of course, that's always easier said than done.

In the trailer for the new show, Frank uncovers a conspiracy that goes through pretty much every single level of the U.S. government, pitting Frank against Homeland Security, the C.I.A., and the F.B.I. Even so, Frank's not one to back down from a challenge and decides he's going to take them all down in order to get the truth. Thankfully, he also has a little help.

Karen, who first came to Frank's aid in Daredevil, will be a returning character in his series. Deborah Ann Woll, who plays Karen, revealed at San Diego Comic Con that "Frank has a soft spot in Karen's heart." Additionally, Karen will be able to "share her authentic self with" Frank, in way she maybe can't with the other people in her life like Matt and Foggy.

"Frank is someone who she could potentially fully open up to," she added, possibly hinting at a more than friendly relationship between the two. Fans have certainly speculated on the possibility of a romance between Frank and Karen since they first met, and now that Matt is presumed dead after the events of The Defenders, perhaps Karen will move on to someone else. Though for someone who was so dead set against Matt continuing to be Daredevil, it'd be a little hypocritical for her to date another vigilante. But, hey, who am I to judge?

Besides Karen, Frank will also have the assistance of a new character in the Marvel Cinematic Universe: David Lieberman, also known as Micro. Micro is an expert hacker that used to be a member of the National Security Agency, until he decided to go rogue and expose the government's secret affairs. Since Frank is working against a government conspiracy, it makes sense that he'd team up with Micro. It appears they have a common enemy and with Micro as the brains and Frank as the bronze, these two could make a formidable team.

You can find out by watching The Punisher Season 1, which is now streaming on Netflix.