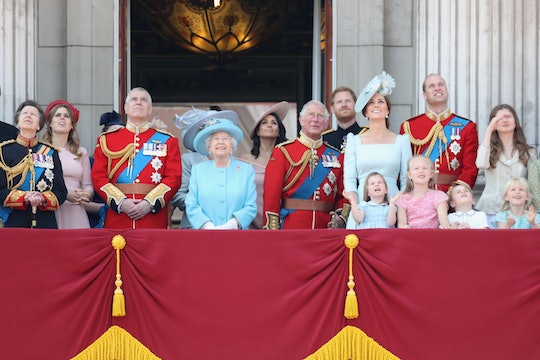 When British royalty, Prince Harry and American actress, Meghan Markle married last month, people were excited to see the cultures coming together and uniting in one ceremony. But most notably absent from this ceremony were politicians — specifically, President Trump. With Trump not being invited to the royal wedding, this led many people to wonder — when will the royal family meet Trump? And will they ever meet him?

But royal watchers shouldn't get their hopes up in seeing Trump interact with other members of the royal family like Markle herself. Because Trump is going for a "work visit" and not a state visit, Trump will not "be honored with an official banquet at Buckingham Palace or a carriage procession up the Mall," according to The Guardian.

Bottom line? His visit will be a little less formal and the red carpet won't necessarily be rolled out in a grand fashion, but it's likely that he will meet with someone from the royal family, which is still pretty exciting nonetheless.

It wouldn't be uncommon for the royal family to meet with the President of the United States. President Obama and his wife, Michelle, grew close with members of the royal family during Obama's eight years of presidency, according to TODAY, taking multiple visits throughout the years, according to Observer, and meeting with multiple members of the royal family. The families were so close that the queen even invited the Obamas to have an extended stay at Buckingham Palace, which they accepted, according to TODAY. Michelle Obama even revealed during an event earlier this year that the queen is very affectionate behind closed doors and even loves giving hugs.

Not only were the Obamas honored with the opportunity to get close to Prince Harry and Prince William, but they also got to meet one of the smallest members of the royal family — Prince George. During a stay at Kensington Palace in 2016, President Obama and his wife met Prince George after he was allowed to stay up past his bedtime to meet the couple wearing pajamas, according to USA Today — and it was all adorably captured on camera.

It is unclear what kind of relationship Trump will have with the royal family when he does meet them, but royal watchers will have to see this play out for themselves during his first visit to the United Kingdom. But Trump has plenty of time left to meet all of the members of the royal family throughout the next two years of his presidency (even if they won't be wearing pajamas like Prince George once did).

I mean, if Trump can meet with the leader of North Korea, it's pretty likely that he will meet with the royal family during his presidency. But when it comes to Trump, people should know to expect the unexpected — and that anything can happen.