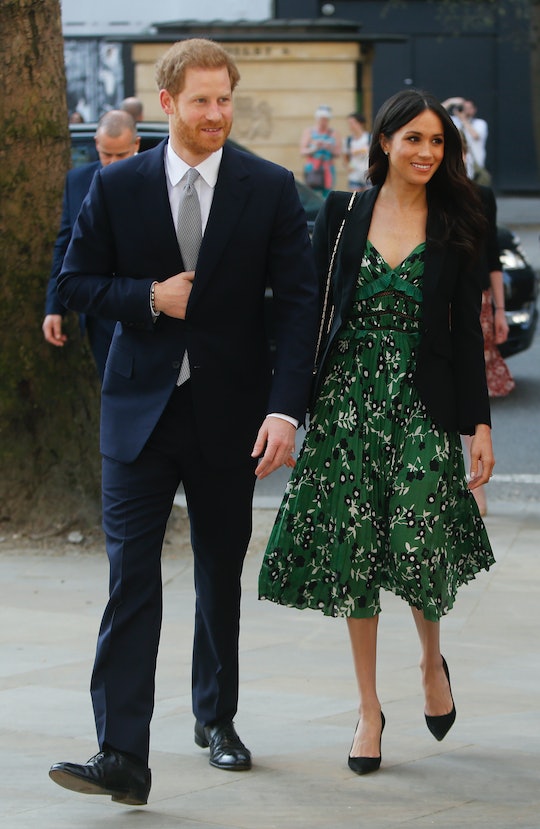 Here's What We Know About The The Royal Wedding's Potential Theme

We're now in the home stretch, people. Prince Harry and Meghan Markle's wedding is this month, and it seems like every day, a little more information is released regarding what to expect on the big day. Since it's going to be such a monumental occasion, people are wondering about every aspect of the wedding — for instance, will the royal wedding have a theme, and who is definitely going to be in the wedding party? As May 19 gets closer and closer, more details about the wedding at St. George's Chapel in Windsor, England are being released, slowly but surely.

Fans of the royal family who have been watching the planning stages of Prince Harry and Markle's wedding unfold already know a lot about what's planned for the event. But there are also lots of things that us commoners won't know until the big day arrives. And while there doesn't seem to be a theme for the royal wedding the way regular, non-royal people who are getting married might have a theme like "retro" or "nerdy" for theirs, the truth is, we can't be sure exactly how the event will go just yet. So who knows if a specific theme might not emerge later?

While an official theme for the next royal wedding has not been announced, I personally noticed a theme when looking over the details of Prince Harry and Markle's wedding on Harper's Bazaar's website. The outlet reported that the wedding cake will incorporate flowers, and the Kensington Palace twitter account shared that the couple has asked for "a lemon elderflower cake that will incorporate the bright flavours of spring. It will be covered with buttercream and decorated with fresh flowers."

That might not seem super unusual, and indeed, it sounds like the wedding cake is going to be beautiful — and, hopefully, delicious to boot. But Harper's Bazaar also reported that the flowers for the wedding "follow a natural wildflower theme," and that the Royal Parks is also going to supply "pollinator-friendly plants" for the occasion. Kensington Palace also reportedly noted in a statement that the florist will "use flowers and plants that are in season and blooming naturally in May," according to Us Weekly.

So it sounds like the couple is really leaning into the spring aspect of their wedding, with fresh flowers not only adorning the venue, but decorating the cake as well. That's not exactly an official theme, necessarily, but it does sound like it will be a lovely way to tie together several details about the event.

Fortunately, there are lots of other details already out regarding the wedding, for anyone who can't get enough royal wedding news. It sounds like the music is going to be great, for starters, with the choir of St. George’s Chapel and music from 19-year-old cellist Sheku Kanneh-Mason featured during the wedding service, according to The Cut. No word yet on whether a musical flash mob is planned for the reception later on, but I'm going to go ahead and guess that royals and dignitaries probably won't be participating in anything like that.

But there are still some things we don't know about Prince Harry and Markle's wedding that we may or may not find out before mid-May. Kensington Palace or other official sources have still not announced Meghan's choice for maid of honor, for example, although we do know that Prince William will be Prince Harry's best man at the wedding, according to Town&Country.

While Queen Elizabeth II had eight bridesmaids when she got married, Kate Middleton had a maid of honor and four attendants, according to Biography. So it's really anyone's guess at this point what Markle's side of the wedding party will look like. It is expected that Prince William's adorable children, Prince George and Princess Charlotte, will play some sort of role — possibly acting as a page boy and flower girl again like they did at Pippa Middleton's wedding, Harper's Bazaar reported. But no one who isn't a part of the planning can be sure of any of that yet.

So while the royal wedding doesn't seem to have a theme, it does sound like Prince Harry, Markle, and everyone else involved in the event are being very careful to make sure it's a beautiful, cohesive occasion that will be remembered for years to come. The rest of us only have a few short weeks to go before we get to see exactly what the royal couple has planned.