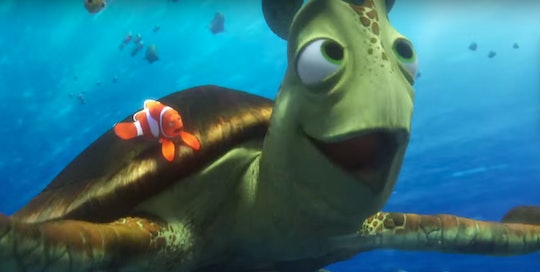 Will The Sea Turtles Be Back In ‘Finding Dory’? Crush & Squirt Are Definitely Fan Faves

Finding Nemo is packed with memorable characters, from Bruce the vegetarian shark to schoolteacher Mr. Ray. Two of the most beloved undersea residents from the film, though, are Crush and Squirt: a sea turtle father and son who take Marlin and Dory for a radical ride on the East Australian Current. Now that Pixar's sequel is complete, will the sea turtles be back in Finding Dory? Good news: the answer is yes!

Audiences got their first glimpse of the righteous duo in the trailer for Finding Dory. The sea turtles are only in it for about five seconds, but it's enough of a teaser to get any fan psyched for the sequel. In May, Pixar released a longer clip of Crush and Squirt on YouTube, according to Polygon. In the scene, Crush gives Marlin a lift again: this time using the California Current. While Dory and Nemo explain their quest to find Dory's parents to the littlest sea turtles on the trip, Marlin concentrates on trying not to get sick. "By the way, crossing the ocean is the kind of thing you should only do once," yells Marlin. "One time!" But as in the first movie, the clownfish's safety net is shredded by a turtle whose vocabulary seems to consist primarily of the word "dude."

Does Finding Dory still not deliver enough Crush? Fans can get some one-on-one time with the talking turtle at Disney California Adventure in Anaheim or Epcot in Orlando, according to the Disney Parks Blog: both include the "Turtle Talk with Crush" attraction. In its newest iteration, "Turtle Talk" includes a special appearance by Squirt, who promises to be a seriously delightful addition. Though Nemo and Marlin are both known to pop by the interactive experience, a number of new favorites will join the conversation: the whale shark, beluga whale, and octopus (technically a "septopus") from Finding Dory all make appearances.

It's still unclear what role the turtles play in Finding Dory, but their expected return to the big screen got fans excited long before seeing the first trailer. In a 2013 list of seven must-haves for the Finding Nemo sequel, NBC News made sure to include Crush and Squirt:

Dudes, we totally need a return of the gnarly sea turtles who speak like surfers, Crush and his son Squirt. Gimme some fin, dude! But no hurling on the shell, just waxed it.

If the first movie is any indication, kids will likely be quoting the turtles' lines from Finding Dory for years to come. Luckily, they're two characters even parents totally love.