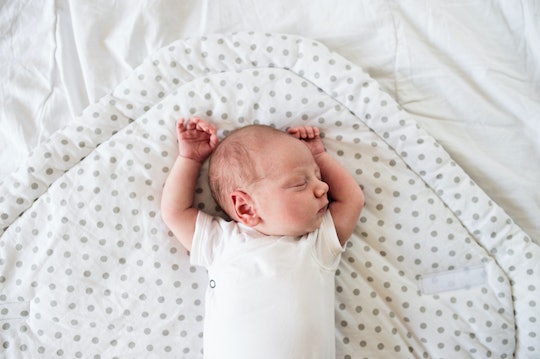 Will The Solar Eclipse Impact My Baby's Sleep Schedule? Here's What You Should Know

Honestly, I slept through many of my cosmology classes in undergraduate school, so my knowledge of solar eclipses comes from comic books and my superstitious MawMaw. However, like many moms, I worry about anything that could screw with my kid's sleep. So with a solar eclipse soon to happen, many parents are wondering: Will the solar eclipse impact my baby's sleep schedule?

I remember when I was really little, there was a total solar eclipse. We bought these special viewing glasses from Natural Wonders, and because I was the only kid in my class to have purchased the glasses, my teacher sent me out to the courtyard — alone — to watch it happen. Ah, the 90s. "Disruptive kid with ADHD has permission from mother to be out of class? Send them to the courtyard for an hour and they're out of your hair."

It was beautiful. It was as though the sun had turned itself into a magnificent halo that shone only for me. I remember feeling profoundly moved and very grateful that my superstitious MawMaw had insisted I be able to see it while everyone else was stuck inside classrooms pretending it wasn't happening — like the world hadn't gone dark suddenly at noon.

Now, as an adult and a parent, I can't wait for my own little ones to see the spectacular sight, but a lot of moms are worried — will the solar eclipse affect my baby's sleep schedule?

Unfortunately, there's not a lot (or any) science on this. Sure, there's a lot of mythology, and if you happen to give birth or get pregnant during a solar eclipse, you're probably going to have the next Aquaman or Magneto according to some very experienced Redditors, but sleep? There just aren't enough eclipses to study it.

However, there is a lot of research on lunar cycles and sleep, and a report in Scientific American noted that full moons tend to disrupt sleep, and make everyone, babies included, groggy and hungover the next day. A total eclipse is a bit like a full moon in reverse. Instead of it being lighter and warmer in the middle of the night, it's darker and cooler during the middle of the day, according to NASA. It stands to reason, even though I'm no physicist, that it might make your baby a bit sleepy. Thankfully, it only lasts a few minutes, unlike the full moon which lasts all night. I imagine it's a lot like taking your child to the movies midday, or walking around the Natural History Museum. It's comfy, cool, and dark. It also happens at midday, so it's likely nap time anyways. (Thanks, Thor.)

As for my kids? We'll be outside, watching it all happen through our groovy solar eclipse glasses before heading inside and making ice cream sundaes.

More Like This
9 Bedtime Mistakes That Are Keeping Your Baby Awake & How To Fix Them
10 Ways Breastfeeding Is Good For Moms, Too
20 Weird But Genius Health & Beauty Tools For Babies
Gathre’s Winnie The Pooh Collection Is Finally Here