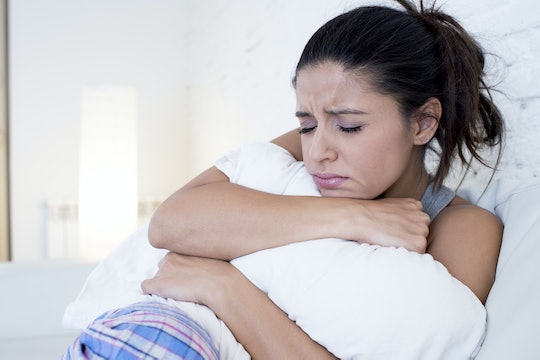 There's a rare cosmic event happening on January 31st. It's so rare, it hasn't happened in over 150 years. That night if you look in the sky, you will get to see a Super Blue Blood Moon. This means that not only will it be a supermoon, orbiting pretty close to Earth, but it's the second full moon of the month (blue) and there will be a lunar eclipse giving the moon a reddish tint (blood). This seems like an interesting but benign phenomenon, but because it's a lunar thing, could the Super Blue Blood Moon affect your period?

Scientifically, there isn't any evidence that points to a supermoon, blue moon, blood moon, or any moon for that matter, affecting your period physically, but one could argue that you can be affected in other ways. The supermoon brings the orbit of the moon closer, which results in a brighter and bigger-looking full moon, but even the extra gravitational pull this brings shouldn't affect your period, as the effects on people are imperceptible, according to Earth Sky. People sometimes think about women's periods when they think of the full moon because lunar cycles are 28 days and menstrual cycles are typically 28 days on average (give or take 7 days), according to Everyday Health. However, a study done published in the Journal of Endocrine Regularities looked at 74 women through 980 menstrual cycles, and found that there was no relationship between the moon and menstruation.

There was another study done in Scandinavia that showed that 30 percent of women had their periods during the new moon (when the moon looks like a thin crescent), but there was no large group that was shown to have their period return two weeks later, so it's not like the full moon automatically kickstarts a period cycle, if that's what anyone was thinking.

Periods in general can cause us to feel a little moody, bloated, give us headaches, and in general not feel like our best selves. Interestingly, 90 percent of women get PMS and it affects women in their 30s more than any other age group, stated to Women's Health.gov. Old wives tales and folklore about the moon having an effect on emotions (for men and women) can be wildly varied. It is interesting to note the original meaning of the word "lunatic" though in its relation to the moon. "Originally, affected with the kind of insanity that was supposed to have recurring periods dependent on the changes of the moon," stated Quora. So it's not difficult to see why people would associate the peoples' moods with the lunar cycle.

There's talk about homicides going up and emergency rooms being busier on nights with a full moon, but there's no hard evidence of that, and not because researchers haven't tried to make the connection. A scientific study published on Sage Journals showed no link between the lunar cycle and violence or any type of aggression. So, even though there are times just before your period (and during) when you feel like you could jump out of your skin or become upset with very little provocation, it doesn't look like you can blame it on the moon.

Astrologer Amelia Quint did tell Hello Giggles that a moon can make you more aware of the cyclical nature of your menstrual cycle, especially if you have a 28 day cycle that echoes the 28 day lunar cycle. And even if science hasn't shown a link, it's still possible to feel like the moon is affecting your mood, as outlined in The Moon School.

If you are even inclined to believe a tiny bit that the moon could affect your period, it's easy to see why this triple play of phenomena — the super moon, the blue moon and the eclipse — could cause you to be on alert for something unusual to happen to your body. However, most of that is myth and your period shouldn't be any better or worse than any other month. If you decide to stay up that night and are able to see the eclipse, at least for those moments, perhaps your period won't feel so distracting.