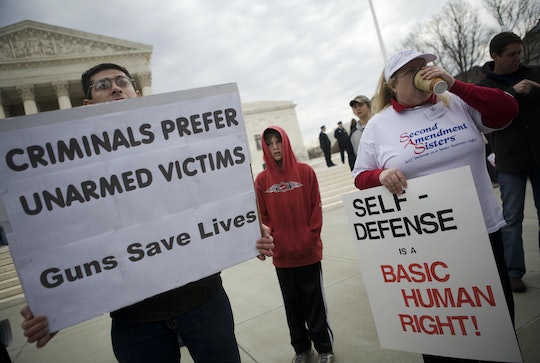 Will The Supreme Court's Gun Decision Open The Doors For Further Legislation? Possibly

In a landmark legislation, the Supreme Court voted on Monday that the federal government can place a life-long gun ownership ban on people who have been convicted of domestic violence, even if their acts were not premeditated or intentional. Domestic violence is responsible for more deaths and injuries every year than mass shootings. While the ruling is undoubtedly a win for gun control advocates, will the Supreme Court decision open the doors for further gun safety legislation?

The Court's decision is important because it protects the government's ability to take guns out of abusive households. While this is a small victory for people hoping for expansive gun regulation, there's reason to celebrate. Victims of domestic violence are put at a much higher risk of being killed when a gun is involved.

The 6-2 decision came after two Maine men argued that their past domestic violence convictions shouldn't subject them to a gun ban because the acts were not intentional. The judges didn't agree.

“A person who assaults another recklessly ‘use[s]’ force, no less than one who carries out that same action knowingly or intentionally,” wrote Justice Elena Kagan.

In recent years, restrictions on gun ownership due to domestic violence have passed in several states. The Court's decision is a sign that it will continue to support gun control in certain situations.

“Access to a gun is what often turns domestic abuse into murder,” she said in a statement. “That’s why the Supreme Court’s rejection of dangerous arguments that would have eviscerated federal gun laws and allowed dangerous convicted abusers to legally possess guns in more than two-thirds of states is so significant.”

But further gun legislation could be difficult to pass. Not all of the judges agreed with the decision. Justice Clarence Thomas, a fierce gun rights defender, dissented and said the decision showed an unparalleled disregard for the Second Amendment.

"We treat no other constitutional right so cavalierly," he said in his dissent. "In construing the statute before us expansively so that causing a single minor reckless injury or offensive touching can lead someone to lose his right to bear arms forever, the court continues to relegate the Second Amendment to a second-class right."

However, the decision sets an important precedent and opens the door for broader interpretation of existing gun regulations. While expansive gun control is a ways away, the ruling could lead to similar decisions on other fronts in the fight for gun control.