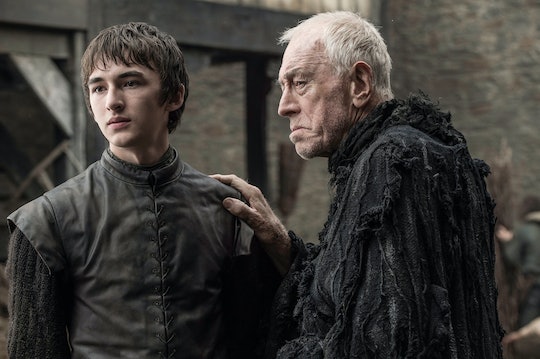 Will The Tower Of Joy Reveal R+L=J On 'Game Of Thrones'? The Moment May Be Coming

Now that Jon Snow is very much alive and Tyrion has officially made friends with the dragons in Mereen, I have just one lingering question for the show to answer this season: Will the Tower of Joy reveal R+L=J? Game of Thrones has yet to introduce the backstory for fans' most heart-stopping theory, but with the way things are going — and given Bran's training with the three-eyed raven — it seems not only likely that it'll come sooner than we expect (yes!), but totally possible that Bran will see the moment that set everything in motion. And it's going to be yuge.

According to just about every fan of the show (and every site dedicated to dispelling rumors and theories), R+L=J is basically the backbone of the series. The theory states that Jon Snow is actually the child of Lyanna Stark (Ned's late sister) and Rhaegar Targaryen (Dany's brother). If the theory is true, which pretty much most fans believe, the oath Ned made to his sister on her deathbed was to to care for Jon as if he was Ned's own — and because Ned is the most loyal, faithful, honest dead dude in Westeros, he did, putting his reputation on the line. In order to keep Jon safe, Ned raised Jon as if he was his own — literally — choosing to treat him as his bastard son than let on that his sister had a baby with Rhaegar.

WetPaint has a pretty thorough take on the whole Ned/Robert Baratheon/Rhaegar/Lyanna love rectangle:

Rhaegar Targaryen ran off with Lyanna Stark, who was betrothed to Robert Baratheon; that's what prompted Robert's Rebellion. If you ask Robert, Rhaegar abducted Lyanna, but there are a lot of hints in the book, and even a few on the show, that Lyanna actually went willingly. If so, it's easy to imagine that she eventually got pregnant with Rhaegar's child.

And things get even more interesting when you throw Ned's Infamous Promise into the mix, which WetPaint also sums up pretty nicely:

In the books, there is a flashback scene to Ned, after the war, finding his sister in a place called the Tower of Joy, where she was lying in a bed of blood. She died there, but before she did, she asked Ned to promise to do something. We're never told what that promise is (neither in the show or the books published to date), but it was clearly important. Many fans think that she had just given birth and was dying because of it (that would explain the blood in her bed), and she wanted Ned to keep her son's identity a secret so he wouldn't be killed for having Targ blood.

It's a lot to digest, but given the fact that Bran is training with the three-eyed raven (and also given the fact that we're introduced to a young Lyanna during Episode 2), everyone is pretty damn confident that R+L=J is coming fast. Also, given the three-eyed raven's cryptic comments on the past, it seems only likely that he'll clue Bran into the horrors that happened at the Tower of Joy. What Bran will do with that knowledge is anyone's guess, but it's definitely coming.