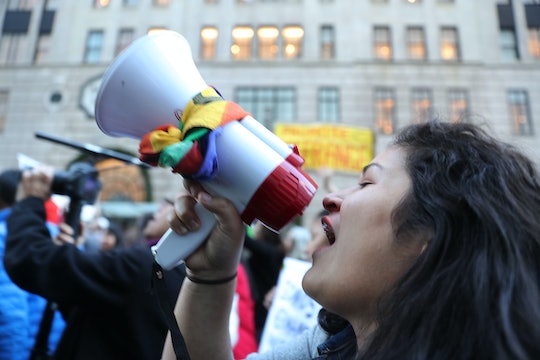 Will The Women's March Be Dangerous?

More than 200,000 people are expected to attend the Women's March on Washington, a movement that sprang out of an effort on Facebook in response to the election of Donald Trump as the 45th President of the United States. With so many people expected to descend on the nation's capitol on Saturday, Jan. 21, will the Women's March on Washington be dangerous? While organizers for the event did not immediately return Romper's request for comment, the organizing committee did issue a press release last December giving attendees an overview of all the agencies that will be involved with the event.

The planning process will be ongoing until days before the march, and we will continue to work closely with the National Park Service, Metropolitan Police Department, Homeland Security, Capitol Police, and other agencies to ensure a safe march with all logistics in place to accommodate the number of people we anticipate convening. For security reasons, we will not release any further details about march logistics until a later date.

In the mission and vision statement of the Women's March on Washington, organizers are keen to stress that the march adheres to Dr. Martin Luther King's six principles of nonviolence. As such, the safety and security of all march attendees is not just a priority, but part of the very fabric of what the march represents.

The organizing committee has anticipated that a massive group of women convening on the National Mall might be intimidating to some who wish to come to D.C., so they offer the following safety information at the Women's March website: "The WMW has a team of experienced and professional national organizers working to ensure that every safety protocol is followed," their FAQ page reads. Can you bring your kids to the Women's March? They've got that covered, too: "The decision to bring your children is a personal one."

Linda Sarsour, one of the march's four co-chairs and executive director of the Arab American Association of New York, told The Guardian that the event is being organized professionally, with help from official partners such as Planned Parenthood. "It takes more than I ever imagined to organize a mass mobilization," Sarsour told The Guardian. “Negotiating with the six federal agencies on the route, insurance, fundraising, vendors, private security.”