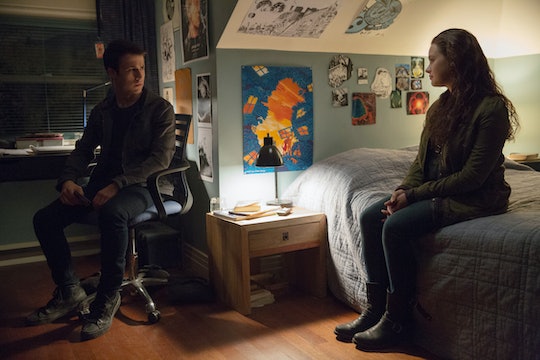 After a summer's worth of controversy following 13 Reasons Why's first season, Netflix decided to renew the show for Season 2. The erstwhile limited series has already eaten up its source material — Jay Asher's eponymous YA novel — meaning they're inventing totally original material for next season, which premieres on May 18. Since its showrunner has already flipped the proverbial script by extended the limited series, fans may be wondering: will there be a 13 Reasons Why Season 3? For viewers who hope so, there's a lot of good evidence pointing to that as a possibility.

Most notably, Analy High School, the real-life California school which provided the shooting location for the first two seasons, has already been tapped for Season 3, should it be greenlit. According to The Sonoma West Times, "The West Sonoma County Union High School District board on April 11 approved a third licensing agreement with Paramount Pictures that allows the company to film scenes at the Sebastopol High School."

The school reportedly received a total of $124,000 from Paramount last year for participating in Season 2, and they're contracted to rake in another $66,000 for Season 3, not counting "the overtime of district staff and maintenance personnel and costs of improvements." Another useful tidbit from the report? Season 3 is slated to film later in the year than the previous two seasons, which may hint at a delay in Season 3's release. Paramount plans to be in production from mid-May to mid-December, if they decide to go ahead with it.

Beyond having secured a shooting location, it really does seem like it's up to showrunner Brian Yorkey to decide if a third season of the show is viable. In a January interview with The Hollywood Reporter, Paramount President Amy Powell revealed that they could barely secure him for Season 2. "[Yorkey] was reticent to come back for a second season until he could crack it," she said. "He didn't want to commit to it blindly until he knew how to find an entry point into these characters and their stories."

As for Season 3, Powell said Yorkey has the production company's full trust, adding, "It's up to Brian. We're not going to pressure him to create more seasons if he doesn't feel they are there, but he is already starting to think about what a season three could be."

Meanwhile, Yorkey has been flexible from the start about what the natural progression of the show will be. Early on, he envisioned it as an anthology series, telling Entertainment Weekly:

When we sold the show, there were two ways we thought the show could continue. One way was continuing to follow these characters who really have been through tremendous trauma, all of them in some part coping with the trauma of Hannah’s death and the aftermath. [But] when we originally pitched it, there was another version, which was an anthology version where, in sort of True Detective mode, every year you start with a new 13 reasons.

Of course, the latter model fell through. As we now know, Season 2 follows the same cast from Season 1 as the characters develop in the aftermath of Hannah's suicide and the revelations of her 13 tapes. Yorkey continues:

Depending on whether Season 2 can retain the show's powerful messaging, things look bright for a potential third season.