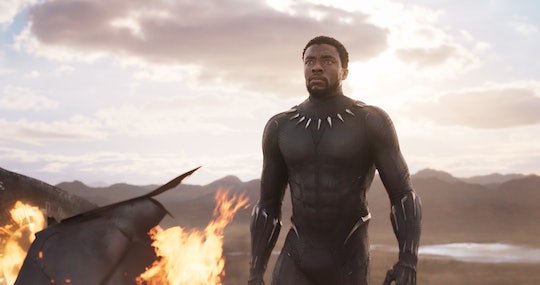 Marvel Fans, Here's Everything We Know About The Chances Of A 'Black Panther' Sequel

After being so eagerly awaited for so many months, Marvel's Black Panther actually managed to exceed expectations. It currently has 97 percent on Rotten Tomatoes with critical praise and rave reviews almost all around. Plus, the film is already a box office smash, with advance ticket sales as early as January already selling out. With Black Panther hitting theaters Feb. 16, its future already seems utterly assured, but you still might find yourself wondering: will there be a Black Panther 2?

Considering its success, a sequel is pretty much a sure thing. There's no way Marvel would pass up adding more movies to the franchise when the first was so beloved. But figuring out when exactly it will make its way to theaters is a little bit trickier. Marvel's schedule is packed for the next few years, though there are some still-untitled movies in Den of Geek's Marvel timetable that might be holding a spot for a future Black Panther film. But taking writing, filming, and post-production into account pushes back that possible release date even farther. Black Panther 2 isn't confirmed just yet, but it definitely seems like it could happen, it just might be a few years away.

In fact, it doesn't seem like the planning has even begun. According to WZZM13, director Ryan Coogler hasn't opened up about what he's thinking of doing with future films — which is totally fair, since the first one's release is so fresh. He should be enjoying his success right now.

That's basically what Coogler told WZZM13, too. When asked about a sequel, he said, "Man, I'm just here to talk about Black Panther. That's all I can talk about. That's all I can think about! We gotta sell the movie and get it out there! That's where my head is. I'm at the last stage of delivering the baby, you know what I'm saying?"

However, in an interview with ScreenRant, Coogler did express interest in one detail of the sequel: he wanted to explore what kind of king T'Challa would become since his story in the movies is so different from his story in the comics. He's more of a child king in the comics after losing his dad at a young age, but he's an adult in the MCU and that means he has to grapple with his responsibilities in a different way. Coogler said:

"So when you meet him [in the comics] you know you dealing with a guy who's thirty-four years old who's been king for a long time. So he has a different type of poise and confidence in his position, you know? Whereas in our film that character is just settling in. So I'd be really interested to see, you know, what kind of king he is with experience and how that affects his performance in the stories."

There is plenty of material for a sequel and Marvel seems ready to take advantage of all the possibilities. Producer Nate Moore told ScreenRant that not only was there hope for future films in this specific franchise, but also crossovers with other characters in the MCU. T'Challa already made an appearance in Captain America: Civil War so there's a chance that he (or his co-stars) might pop up in other Marvel movies as well. In Moore's words:

We've always tried to find room for faces that look like everybody and not just homogenous casting. Panther obviously is a big swing that we hope to continue through many sequels and take some of these characters and put them in other franchises because I do think there's a way to cross-pollinate in an interesting way."

In fact, the next time fans will see some of their favorite Wakandan characters will be in Avengers: Infinity War. Now that T'Challa is officially a part of the Marvel universe with his own acclaimed film behind him, it's practically a guarantee that his presence will only increase going forward. If you're already craving more Black Panther, chances are you'll be seeing him again soon.