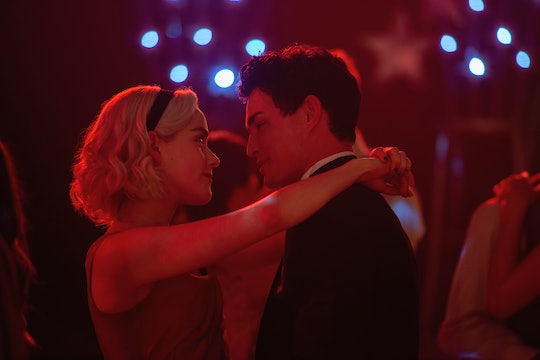 Looks Like 'Sabrina' Gets Two More Seasons, & This Is Not A Drill

With The Chilling Adventures of Sabrina Part 2 dropping on Netflix, fans want to know all the things and they want to know them now. No shame, my friends. When a show that's this good comes along, it's no wonder you're hungry for more episodes as soon as possible, and wondering if there will be a Sabrina Part 3 or not. The newest nine episodes for Part 2 premiered April 5, but what happens beyond that? Here's what I know.

More Like This
Nick Scratch Is An Important Warlock On The Chilling Adventures Of Sabrina
What To Stream Right Now For Kids Who Love History
Everything You Need To Know About The Rugrats Reboot
Exclusive: Cookie Monster Puppeteer Tells Us Why Kids Will Love His New Show Donkey Hodie

Grab the confetti and toss it in the air because yes — there will be a Sabrina Part 3 — and Part 4. That's right. You get at least 16 more episodes sometime after Part 2 drops — and this is not a drill. Apparently the intense excitement over Parts 1 and 2 have paid off. That means more Harvey-Sabrina-Nick love triangle, more Zelda and Father Blackwood relationship drama, and more of Sabrina's powers that are most definitely growing stronger, darker, and well, witchier.

If you need a refresher from what happened at the end of Part 1, buckle up, because it was a lot. First of all, Sabrina telling BFFs Ros and Susie about her witchiness (and the resurrection of Tommy) didn't scare them away, but instead made the friendships stronger and of course, Ms. Wardwell wasn't having it. She conjured the Greendale Thirteen (witches with a grudge after having been hanged to death way back in the day) with a plan to drag the Red Angel of Death to kill all firstborn babes. Typical evil stuff. Oh, and the whole Blackwood thing? You know he was up to know good even if he did arrange for coven members to seek refuge at the Academy of the Unseen Arts, BTW. Sabrina was eventually forced to sign her name into the Book of the Beast to get more power from the Dark Lord to save her beloved town of Greendale.

Another revelation the story will continue to touch on in Part 2, is the fact that Miss Wardwell is Madame Satan, otherwise known as Lilith (more relationship drama). She's trying to get Sabrina to become Satan's foot soldier so as not to take her place.

With all of this mayhem, I know many fans want to know what's going to happen with Sabrina's love life now that she's embracing her darker side. That brings me to Harvey. Dear, sweet Harvey and Sabrina breaking it off "for good" to protect him. But everybody knows that feelings like that don't just disappear so I hope you're ready for a good old-fashioned love triangle wherein Sabrina is torn between her mortal love (Harvey) and her sexy warlock love (Nick).

Regardless of what happened in Sabrina Part 1 or Part 2, take comfort in the fact that you have many more episodes headed your way. So when all looks to be lost in Greendale, just remember — there are two more seasons (at least) to fulfill before its demise.