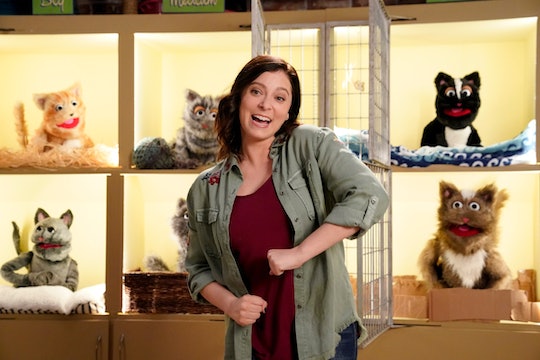 Things tend to get a little wild in West Covina, California, and this last season was no different. But now that the Season 3 finale is upon us, it's definitely worth knowing if there will be a Crazy Ex-Girlfriend Season 4 or not. Although The CW hasn't officially renewed it for a fourth season, things are looking good for the show.

Last year, Season 2 was the lowest rated show on the network and it still got renewed so it's likely that Season 4 is in the bag, according to Variety. Network president Mark Pedowitz said at the time that it had nothing to do with numbers and everything to do with how much people loved the show. Especially the critics. He said at the time, "Crazy Ex [Girlfriend], Jane [the Virgin] as franchises, have helped alter the perception of what the CW has become."

Next year, the network is planning on making some changes, like beefing up their Sunday night programming again to compete with other networks, IndieWire reported. It's likely that Crazy Ex-Girlfriend will be moved to that high profile block, which means even bigger and better ratings for the show.

Also, the show was always supposed to be at least four chapters, according to showrunner Aline Brosh McKenna. She told reporters at the 2017 Summer TCA press round, as reported by Nerdist:

We do the seasons, ‘Live like you’re dying. We worked out four chapters. It’s a story told in four chapters, whether that’s four seasons … ? We knew the last sentence of every chapter. One of the things that everyone on the show likes, we do know where the story is going. We like to know things way in advance and we do have four distinct chapters planned out.

As much as fans would love for the show to on and on forever, we can trust McKenna and star Rachel Bloom to do right with the story and make sure it lasts for as long as it should.

If you're missing the whole West Corvina crew this spring while you wait for renewal news, you can catch the whole cast on tour. They're doing an eight-city tour performing songs from the first three seasons, so you can hear classics like "Period Sex" and "The Math of Love Triangles" in person, which should be amazing. Participant include the likes of Vincent Rodriguez III, Aline Brosh McKenna, Scott Michael Foster, Adam Schlesinger, Pete Gardner, Jack Dolgen, and, of course, Bloom herself.

Tickets went on sale on Valentine's Day (of course) and some cities are already sold out. That's a good sign, because it means that maybe they'll add more cities or do it again. Bloom told Entertainment Weekly:

There is nothing like performing musical comedy live. It’s not just a performance, it’s an ongoing dialogue between the performers and the audience. We are so excited to offer new renditions of some of our beloved songs and connect with our amazing fans.

If the fans of the show are amazing, it's only because the show is just that good. Not only is it hilarious and fun, it's also one of the only shows out there that realistically portrays dating with a mental illness and celebrates women in a way that doesn't feel forced or cheesy. And that's exactly why this show has to come back for more seasons.