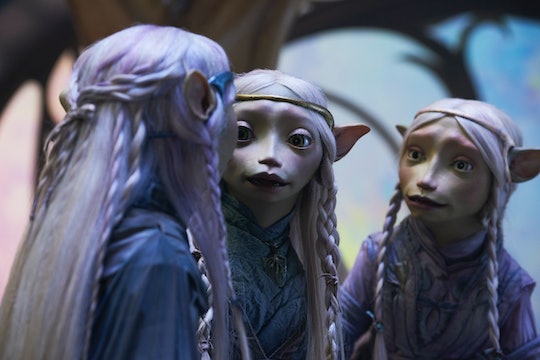 Wait — There Has To Be More ‘Dark Crystal’ On The Way

After nearly four decades, fans of the Jim Henson’s 1982 fantasy puppet saga were treated with a prequel on Netflix. As a series, Dark Crystal: Age of Resistance aired with 10 episodes, and dove into the world of Gelflings and Skeksis and their battle for power and survival. Because the finale ended with a few nail-biting cliffhangers, fans are left wondering if there will be a Dark Crystal Season 2 on Netflix.

As of now, Netflix hasn’t confirmed a second season, but that doesn’t mean it won’t in the near future. Unlike most broadcast networks, the streamer doesn’t usually disclose ratings information, so it’s hard to gauge how well its series are doing. But, it’s safe to assume, if Dark Crystal: Age of Resistance gets high viewership numbers and maintains a strong social media buzz, there’s a good chance Netflix will renew it. Fans will just to keep their fingers crossed and wait.

But while media executives work on making a decision, viewers can take comfort in knowing that series’ creators Will Matthews and Jeffrey Addis have already planned out a second season. When talking to IndieWire, Addis revealed they are “ready to go” with a “concrete” map for Season 2, and Matthews said they went into producing the show with a large, evolving story arc.

“When Jeff and I pitched the show to Netflix way back four years ago, we had an ending that we care a great deal about,” said Matthews. “We had an ending that talks to the movie — If we are lucky enough to get more seasons then the story will go on and we know where it’s going and it’s maybe more hopeful than you might think.”

The series follows three Gelflings — Rian (Taron Egerton), Brea (Anya Taylor-Joy), and Deet (Nathalie Emmanuel) — as they discover the dark crystal as the source of the evil Skeksis’ power and go on a dangerous mission to start a rebellion, retrieve the crystal, and finally overthrow their oppressors. The season ends with an epic battle and teases a new weapon the Skeksis could potentially use against the Gelflings. It may be awhile before fans find out where the next season is headed — or if there will be one at all — but in the meantime, they can dive back into Thra with a new series of graphic novels.

On Sep. 25, Boom! Studios will release a 12-issue comic book series titled Jim Henson’s The Dark Crystal: Age of Resistance, according to The Hollywood Reporter. Written by Nicole Andelfinger and illustrated by Matias Basla, the comics will refer to events and characters from the Netflix series. The comics will “go deeper into the history of Thra and its inhabitants than ever before making it an essential read for any fan of Jim Henson’s beloved film, but also illuminating the Netflix series in ways you won’t want to miss,” editor Matthew Levine told THR.

So, as the fate of Dark Crystal is being decided, fans can take comfort in knowing the upcoming comic book series will fill them in with more Gelfling adventures while they wait.

Dark Crystal: Age of Resistance is currently streaming on Netflix.