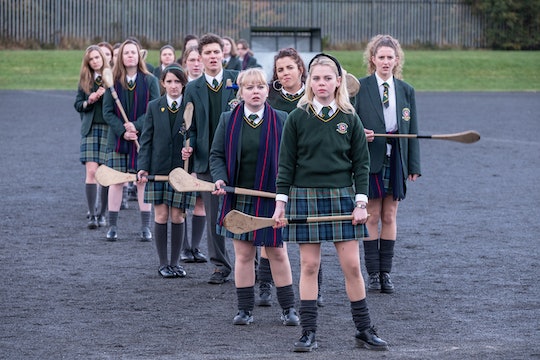 Since the first season of Derry Girls began airing, fans have been clamoring for more. Season 2 premiered on Channel 4 in the U.K. in March, and has just now begun streaming on Netflix. So naturally the show's global viewers are on pins and needles waiting to hear if Derry Girls Season 3 will happen. In true showbiz fashion, news like this breaks on its own timeline, and airs even later. B rest assured, Derry Girls fans, the series was confirmed for its third season.

However aside from the assurance the show will, indeed, return, there are little details to be had. If the show follows the same schedule as Season 2, the third installment will premiere in the spring of 2020 in the UK and make its way to Netflix some months later.

One of the stars of the show, Nicola Coughlan, tweeted in July that the cast and crew would return to Belfast to film the show in 2020, but it's unclear exactly when that will happen. As for Season 2, it picks right up on the heels of the Season 1 finale. Each episode is a tight 30 minutes or less, with six episodes per season. That's not a huge commitment, so if you're thinking of dangling your toes into the Derry Girls water, now is the time.

In case you haven't caught onto the sleeper international hit, the coming-of-age comedy follows four teenage girls from Derry, and a "wee" English boy, James, as they navigate Northern Ireland during The Troubles in the early '90s. The Troubles refer to the long, violent conflict between Protestant British Loyalists, the majority group, and the Catholic Irish Nationalists, the minority. The show is based on creator Lisa McGee's experiences growing up in the town of Derry in Northern Ireland during this era.

While Season 1 set up the Derry world, Season 2 expands on the lives of the five teens, just living normal teenage life in between bomb scares. This includes a possible burgeoning romance between Erin (Saoirse-Monica Jackson) and James (Dylan Llewellyn) as well as real historical moments such as the actual speech from former President Bill Clinton during his 1995 visit. McGee told Radio Times she hoped to give the group more hope as Derry marched towards peace and the Good Friday Agreement of '98.

Nobody knows what exactly will come in Season 3, but one thing that is certain is that after just a few hours of content, the show has had a massive impact. Just check out the real city of Derry's massive mural of the show's five stars if you don't believe me.

Ian Katz, Director of Programs at Channel 4, said, "At a time of great uncertainty about the future of the country thank God we have one unequivocally good piece of news to look forward to: the Derry Girls will be back to make our lives a bit brighter and more fun." If nothing else, I know I could use a little more brightness and fun. Who's with me?