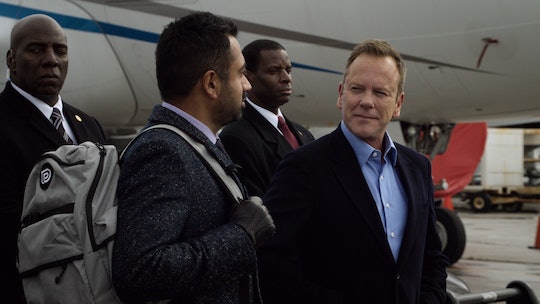 Netflix is known for churning out original content monthly and most of the time, it turns out to be television gold. The streaming platform is also good for reviving cancelled TV shows at the last minute to breathe new life into them and that’s what it did for ABC’s Designated Survivor. Although Netflix picked up the show for Season 3, it still has fans wondering if there will be a Designated Survivor Season 4 or not. The political drama got off to a strong start on ABC but and flew into a second season with ease and, it seemed, it was on the fast track to primetime success on the network. After lower Season 2 ratings, however, ABC cancelled the series and Netflix swooped in to premiere Season 3 on June 7.

Designated Survivor is marketed as a Netflix Original in the preview for Season 3, so by all accounts, this doesn't look like a one-off season to end the series. That’s entirely possible, especially since there hasn't been an official Season 4 announcement yet, but right now the show’s future on Netflix is promising. The streaming platform is likely waiting to see how Season 3 is received before officially moving forward with another season, but if there is a Season 4, it will likely premiere on Netflix.

The premise of the show was unique to start, which is likely why it saw fast success after its series premiere. Kiefer Sutherland plays a lower level cabinet member who just happens to be the next in line to be sworn in as president after everyone above him is killed in an explosion in Washington, D.C. He is the most unlikely candidate to take the job but, as it is his his duty, he becomes the president and slowly earns the trust and respect from those around him, including the US people.

Designated Survivor was so successful right off the bat that instead of being given a few episodes until it was officially ordered by the network, ABC picked it up as a straight to series show and skipped the pilot stage that new shows normally go through. Unfortunately, Designated Survivor didn’t continue to perform well and shortly after ABC cancelled the show, Netflix picked it up for a 10-episode third season.

Season 3 is going to start off with Sutherland’s Kirkman’s first ever campaign in full swing. He has never had to campaign for presidency before since the position sort of fell in his lap, so this is brand new territory all around. It could also set up the show for some interesting future seasons if Netflix decides to keep it around beyond Season 3.

Part of the reason Designated Survivor didn't end up doing so well on ABC might have to do with the fact that it went through four different showrunners in two seasons. Neal Baer was chosen as Season 3’s showrunner and, he told TVLine, his goal was to come up with storylines that will entice Netflix head honchos. "I got to thinking about what new characters we would need to tell the kinds of stories that Netflix would encourage us to do," he said, of planning Season 3.

Right now, it’s not clear if there will be a Designated Survivor Season 4, but if the series can do well on Netflix, then I wouldn't be surprised if it has a permanent home on the streaming platform. It’s officially under the Netflix Original title, so that’s definitely possible. Unfortunately, fans will probably have to wait for a little while after the Season 3 premiere for any concrete answers.