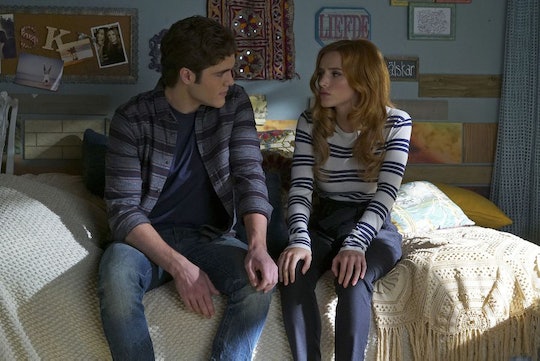 Though many people binge watched Famous in Love a while ago, for those who have been watching the episodes live each week will finally see how the first season ends during Tuesday's two-hour finale. Now that the season is properly coming to a close, it's no surprise that fans are already asking about the show's future. Will there be a Famous in Love Season 2? Unfortunately, Freeform hasn't renewed the show just yet, but there seems to be a good chance it could still happen.

Though the show's freshman season hasn't been doing too well in the ratings department, when asked about a second season during the ATX Television Festival, Freeform executive Jennifer Gerstenblatt said the network is "really trying and talking" about another season. However, as of right now there are no guarantees about another season of the show.

It's clear the fans, as well as the cast, want to see more of the show though. During an interview with Just Jared, Carter Jenkins, who plays Rainer on the show, discussed his hopes for Season 2, if there is one. "I hope Rainer gets a girlfriend," he confessed. Throughout the season, Rainer and his co-star Paige (Bella Thorne) had a will they/won't they relationship that was also a bit of love triangle. When Rainer met Paige, he'd just gotten out of a relationship with his ex Tangey (Pepi Sonuga). Meanwhile, Paige was trying to figure out her feelings for her very close friend and roommate Jake (Charlie DePew).

If Rainer's still looking for a girlfriend come Season 2, it doesn't bode well for Paige and Rainer's chances in the season finale. It's already widely known that the season finale ends with quite a few cliffhangers, hence why many fans are already desperately hoping for a Season 2.

Almost everyone on the show has a secret and those secrets are going to come out in the finale, to very different results. Someone may not even survive it all. Filled with twists that co-creator I. Marlene King has become known for, as well as some romance thrown into the mix, the two-hour finale is sure to keep fans on the edge of their seats all the way through. For those who've already watched it, you may even want to watch again. It's just that good. Plus, the more people that watch, the better chances there are for a second season.

If you're a fan, make sure to let Freeform know how much you love show by watching the finale tonight at 9 p.m. ET.