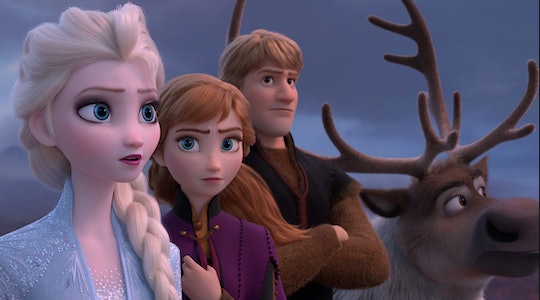 'Frozen 2' Leaves The Door Open For A Third Movie, But Will It Actually Happen?

The next chapter of Elsa, Anna, Kristoff, Olaf, and Sven's adventure has finally been told, but the answer to whether there will be a Frozen 3 remains unknown. Given the initial success of Frozen 2 thus far and the sequel's conclusion, it seems there's room for another installment in the cards. However, based on comments made by the filmmakers themselves, this Disney story may have come to end.

Frozen 2 hit theaters on Nov. 22 and takes viewers outside of Arendelle and "into the unknown" to an enchanted forest. The group sets out to find the source of Elsa's powers, figure out whose voice the ice queen keeps hearing calling out to her, and to stop the enchanted spirits from destroying Arendelle. Not a huge mission or anything, right? In the end, Elsa essentially becomes the fifth spirit — in addition to the water Nokk, Bruni the salamander (the fire spirit), Gale the wind spirt, and the Earth Giants — that calms the rest, in addition to bringing the people of Arendelle and Northuldra together.

At the very end of Frozen 2, however, Elsa abdicates the throne so she can be free to live among the other four spirits alongside the Northuldra people. It's then that Anna becomes queen of Arendelle after finally accepting a proposal from Kristoff. All of this clearly leaves the door open for the possibility of a Frozen 3. But what have the creators and actors of the franchise said about a theoretical third installment?

Romper's request for comment from Disney regarding whether a third Frozen installment could be in the works was not immediately retuned, but Jennifer Lee — writer/co-director/chief creative officer for Frozen and Frozen 2 — has made it seem like this sequel could be the end of the line. At the same time, though, she didn't completely write off the possibility for more. "This feels like what we set out to accomplish; it feels like the end," Lee told Digital Spy earlier this month. "But the first one felt like the end when we did it. We don't know. We don't know. I think it is right now, it feels like the end."

In case you were wondering, Idina Menzel, who voices Elsa, also sort of made it sound like there was a chance for another film. When Menzel was asked if she thought she had voiced Elsa for the last time, the Broadway singer told Yahoo!, "You’re going to make me cry! I didn’t think about it. I think about it being the last session with the creative team who are my Disney family for this particular film, and thinking, ‘Oh my God, it’s been three years [in production]’, and it’s bittersweet, you know?"

Based on the way Frozen 2 ends, Frozen 3 could go in million different directions, if it were to ever happen. The first movie's villain, Prince Hans, is repeatedly mentioned in Frozen 2, potentially setting viewers up for a "return with a vengeance" sometime in the future, as Screen Rant suggests. Or, perhaps an entirely new adventure comes of Elsa's new life living free with the other spirits alongside the Northuldra people. (Perhaps Elsa and Honeymaren really do become a couple?) Maybe Anna and Kristoff have kids? The possibilities are endless!

Of course, Disney just spent years working on Frozen 2, only for fans to immediately want more. It's both a blessing and a curse. And considering there were six years between Frozen and Frozen 2, I wouldn't expect another full-length film anytime soon. But who knows? Perhaps Disney will delight fans with more short films — similar to Frozen Fever and Olaf's Frozen Adventure — in the near future. Whatever ultimately happens, I think I speak for all Frozen fans when I say: We want more!