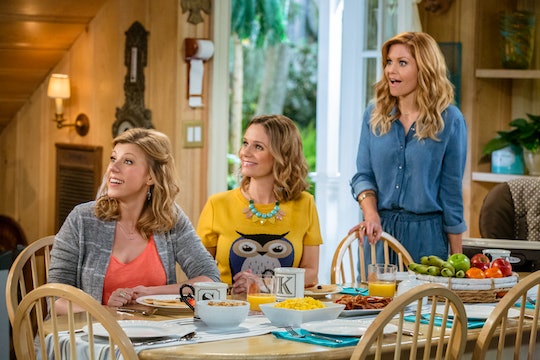 If the third season of Fuller House seemed a little short to you, that's because it was. Only the first nine episodes of Season 3 aired in September, but now the final nine episodes are here. Since most fans will probably binge the whole back half of the season this weekend, it's not surprising that people are already asking: will there be a Fuller House Season 4?

Unfortunately, there's been no word yet on whether or not there will be a fourth installment of Fuller House, but the odds seem good. The show continues to hook fans and remains buzz-worthy amongst critics. It wouldn't be at all surprising if now that the back half of Season 3 is here that Netflix announced the series was renewed for Season 4 very soon.

Until then, fans should be excited for the return of the series, especially after that massive cliffhanger at the end of Episode 9. In case you don't recall, when the first half of Season 3 left off, everyone was on their way to Tokyo for Steve's wedding to C.J. However, on the plane ride, D.J. accidentally confessed to Steve that she thought he was her soulmate (she was wearing a sleeping mask at the time and thought he was Kimmy). She also revealed that she would've chosen him over Matt, her current boyfriend, if Steve hadn't revealed he'd met C.J. Oops.

D.J. obviously didn't mean to say all of those things to Steve, though it's very risky to divulge such secrets with your eyes closed, regardless. However, now that the cat's out of the bag, it's up to Steve to decide what he'll do with this information. Will he call off the wedding with C.J. and confess his own feelings for D.J.? Or will he decide that C.J.'s still the one he really wants to be with? It's difficult to predict how this will all play out, but thankfully the wait for answers is over.

Most fans are rooting for Steve and D.J. to rekindle their relationship. The pair were high school sweethearts and while they went their separate ways in the original Full House series, that hasn't stopped fans from hoping for a reconciliation between the pair ever since. Both Steve and D.J. have grown up quite a bit since leaving high school, and while a lot of things have changed, the special bond between them still seems to be there.

Still, based on the trailer for the next nine episodes, it looks like it'll be difficult for Steve and D.J. to figure out their relationship. Besides the fact that Steve is supposed to marry someone else, in the preview Matt is seen on bended knee, presumably proposing to D.J. with that ring he showed to Stephanie in the midseason finale. Will Steve confess his feelings to D.J. before it's too late?

Besides the Steve, D.J., C.J., and Matt love quadrangle, there are also some other things that need to be dealt with in these next nine episodes. For instance, when the season left off, Stephanie visited a fertility doctor and learned that she still has some viable eggs. Her family even offered to pitch in to help pay for the in vitro fertilization (IVF) process, so that she could fulfill her dream of being a mother. Suffice to say, I'm very much looking forward to how her journey will progress.

You can see how it all plays out when you watch Fuller House Season 3B, which is now streaming on Netflix.