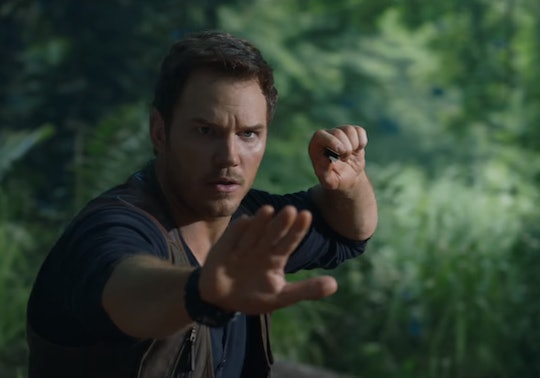 Don't Worry, There Will Indeed Be A Third 'Jurassic World' & Here's Everything You Need To Know

Summer is the perfect time to enjoy a theme park, but this year millions of people are flocking to see one be destroyed. Jurassic World: Fallen Kingdom has taken over theaters and has likely left loads of excited fans wondering if there will there be a Jurassic World 3 and if this dinosaur adventure will just keep on going.

Like the originals, Jurassic World was always planned as a trilogy. So, yes — you're in luck, there will indeed be a third film one day. According to Variety, it was announced in February 2018, well before Fallen Kingdom had come anywhere near theaters. The third film is slated to hit theaters on June 11, 2021, according to Variety, so audiences have quite a while to enjoy the whole series before that.

Colin Trevorrow is the mastermind behind the Jurassic World series. He co-wrote and directed the first, co-wrote and produced Fallen Kingdom, and is returning as co-writer and director for Jurassic World 3, according to Entertainment Weekly. He told Entertainment Weekly that he would describe the first film in the series as action-adventure, the second as horror-suspense, and the third is planned as a science thriller. He compared it in the interview as being closest to the original Jurassic film, which came out in 1993.

Den of Geek wrote up an interesting theory about the path the third movie might take, and it reaches all the way back to a script written in 2004. Among a spate of scripts written after the first trilogy was one by John Sayles, writer/director of monster movies like Piranha and The Howling, according to Den of Geek. They pointed out that several elements from Sayles script seem to be echoed in Kingdom, including the inspiration for Chris Pratt’s dino-trainer character Owen Grady, and a few action sequences which are nearly identical.

Most similar, however, is the idea of weaponized dinosaurs, something that was introduced in World with Vincent D’Onofrio’s security guard who wants to see the dinosaurs turned into trained war machines. That’s a theme that is carried over into Fallen Kingdom, with DNA cloning escaping the confines of the park, according to The Hollywood Reporter, and is expected to be even further explored in the third film.

He did promise that Jurassic World 3 won’t contain any more hybrid dinosaurs, which have been featured heavily in the first two movies. "I’m looking forward to getting a little back into the paleontological, wild animal, true dinosaur nature of all of it,” Trevorrow told Total Film back in May, as reported by Syfy.

Redemption might be a topic that’s on Trevorrow’s mind lately after a Twitter flap that led to some dark days. As explained by Uproxx, the director was asked in 2015 on Twitter whether a woman could have directed Jurassic World, and at the time, his response did not go over well. "I want to believe that a filmmaker with both the desire and ability to make a studio blockbuster will be given an opportunity to make their case," he wrote, according to Variety. "I stress desire because I honestly think that’s a part of the issue. Many of the top female directors in our industry are not interested in doing a piece of studio business for its own sake."

It did lead screenwriter Emily Carmichael to contact Trevorrow and explain that she would very much like to make big, studio films, according to Uproxx. Fast-forward a bit and now Carmichael is a co-writer on Jurassic World 3. "Good things can come from idiot men saying stupid sh*t and everyone acting accordingly," Trevorrow said, as reported by Uproxx.

At its heart, Steven Spielberg’s original creation of Jurassic Park (based of the Michael Crichton novel) was all about summer fun. Watching dinosaurs fight on a dark, rainy night is much easier to enjoy if there’s a warm, languid evening to enjoy outside. Keep bringing the thrills of mankind’s best science run amok, and fans will be sure to show up for the ride.