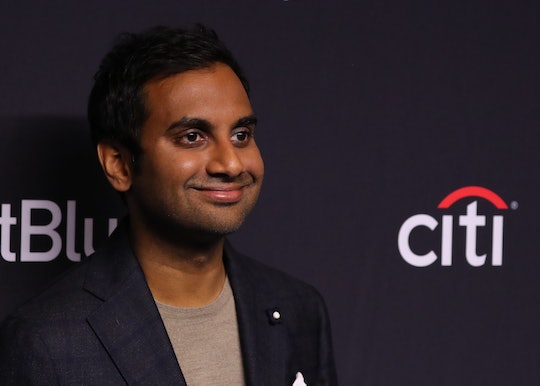 Aziz Ansari Returns To Netflix With A New Special

There hasn't been a season of Master of None on Netflix since 2017, but Aziz Ansari's new comedy special might have fans wondering if another season is soon to come. Right Now premieres on Netflix on Jul. 9, but is more of his series going to follow on its heels? Will there be a Master of None Season 3?

Directed by Spike Jonze, Right Now is based on Ansari's comedy tour Road to Nowhere. The tour had dates all over the world — according to The Hollywood Reporter, it sold out in 75 U.S. cities and 12 countries abroad — but the special was filmed at the Brooklyn Academy of Music. It's notable for being Ansari's return to Netflix after allegations of sexual misconduct were shared on Babe.net in 2018. In a statement issued not long after the allegations, Ansari said that he was "surprised and concerned" to hear his partner was uncomfortable with what occurred between them. He stated that "by all indications [it] was completely consensual."

In 2018, Variety reported that Netflix was still interested in continuing Master of None. Provided nothing has changed since then and Ansari still wants to continue the show, it seems very possible that there could be a Season 3.

At the Television Critics Association summer press tour in July 2018, Cindy Holland, the head of original content of Netflix, addressed the idea of Master of None Season 3. Per Variety, Holland said, "We certainly have given some thought to it. We certainly would be happy to make another season of Master of None with Aziz."

Prior to the allegations, it looked like Ansari was considering a third season, but not immediately. In 2017, he explained to The Hollywood Reporter that he would rather not end the show with Season 2, but he didn't have an exact timeline for continuing. "I don't know when that is, years from now or whatever," Ansari said. "Ideally, I'd like to make more because I love the team of people and the whole process. I'm just happy I could do the show."

At the time of the interview, he didn't feel like he had a "full season of operations in [his] head," but it's been a couple of years since then. Ansari could have enough material by now. It doesn't look like Netflix has changed their position since their initial response. They might just be waiting on Ansari to decide to produce a third season of Master of None.

Without a release date or an official confirmation of Season 3, all of this is just speculation. But it does seem very possible that the show might go on, even if the timeline is far from concrete. Netflix appears to be happy to keep working with Ansari if his new comedy special is anything to go by. It doesn't look like the long break between Master of None seasons was an indication of cancellation. The series is on a long hiatus. There's just no sign of when exactly that hiatus will end.