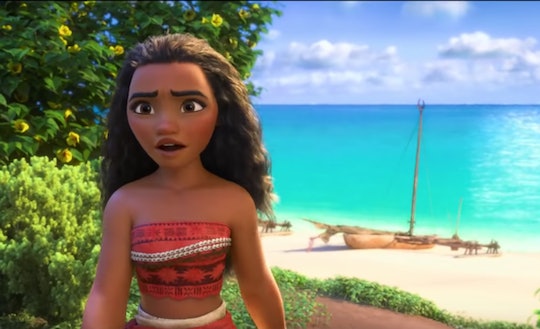 I've Gotta Know: Will There Ever Be A 'Moana' Sequel?

As you work your way through Disney+'s extensive library of content, you may have rediscovered your love for Moana, the colorful 2016 animated musical adventure film from Walt Disney Animation Studios. Although Moana came out years ago, it's fair to wonder whether there will ever be a Moana 2 because there is still so much of her story to tell. Though Disney has yet to confirm or deny any plans for a sequel, some rumors have been floating around.

In Moana, the titular character is chosen by the ocean to go on an epic adventure with the legendary demigod, Maui. She sets out to reunite a relic to the goddess, Te Fiti, and save the people on her island. It's an wild, exciting story, but the ending certainly left the door open for more. And it's possible that a sequel could happen, if a certain comment is to be believed.

Rumors about a Moana sequel first started swirling after Lin-Manuel Miranda's father, Luis, told Page Six in January 2019 that his son was "talking to Disney about a sequel for Moana." But Walt Disney Animation Studios have yet to confirm or deny anything surrounding possibilities of a sequel. Leave it to dad to spill the beans.

Romper has reached out to Walt Disney Animation Studios for more information on whether a sequel is in the works, but did receive an immediate response.

Now, if a sequel really is in the works, it would likely be years before it makes its way to theaters. For starters, Disney Animation Studios has not yet announced any kind of Moana sequel in their extensive list of upcoming projects, and Moana was notably absent from the 2019 D23 Expo, the annual conference where Disney announces all of their upcoming films and projects.

If a Moana sequel is in our future, it might take the same path as Frozen, which was also produced by Walt Disney Animation Studios. After Frozen premiered in 2013, it took six years for Frozen 2 to be released in 2019. If Moana were to follow in Frozen's footsteps, Disney fans could possibly see Moana 2 head to the big screen in 2022. It's also worth noting that the directors of the film, Ron Clements and Jon Musker, spent five years researching and developing the story before even creating Moana, according to The Hollywood Reporter.

Even before Moana came out, Clements and Musker understood that there could be future adventures for Moana to go on. "Whether or not she does in the movies, you feel like she's just getting started," Clements told Collider in November 2016. "It's not quite a happily ever after story." Musker added, "You could spin it off, in different directions... There's an ensemble cast, and they could emerge into something. We'll see how it's received and where it goes."

Moana fans will just have to wait patiently to see if more of her adventures will be told. I mean, as Moana would say, there's just no telling how far she'll go.

More Like This
'Women Talking' Is A Powerful New Movie Based On A Book
Watch An Exclusive Sneak Peek At 'The Amazing Maurice'
'Women Talking' Overwhelmed Me With Grief — And A Sense Of Possibility
Marcel The Shell Is Heading To The Oscars!
What Parents Are Talking About — Delivered Straight To Your Inbox