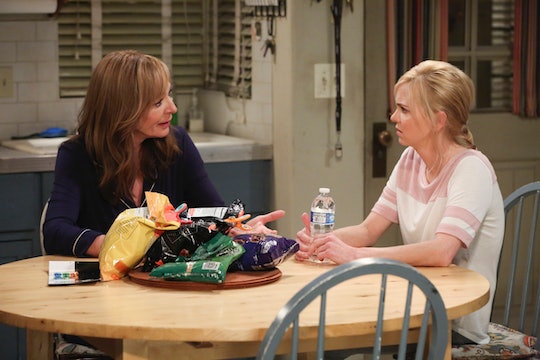 Season 6 of the hit comedy, Mom, is ending with a much anticipated wedding. Bonnie (Allison Janney) and Adam (William Fichtner) are getting married in the final episode, and fans couldn’t be more thrilled. With such a milestone season finale, I’m sure viewers can’t help but wonder what the future has in store for the series. So, will there be a Mom Season 7, or is the end of the road for the show?

Luckily, you’ll get to see a lot more of Bonnie and Christy (Anna Faris) in the next few years. This past February, Deadline reported that after lengthy negotiations, CBS renewed Mom for two more seasons, and the network remains enthusiastic about the show. “We’re exceptionally proud to have Mom on our air; a high-quality, signature comedy with characters viewers love, that also brings strength and stability to our lineup,” Kelly Kahl, President of CBS Entertainment said in a statement. “Under Chuck Lorre’s extraordinary leadership and with his outstanding writing and production team, we look forward to having Mom on CBS for many years to come.”

As reported by Variety, Thom Sherman, Senior Executive Vice President of programming at CBS Entertainment, also shared his enthusiasm for the show, specifically its talented cast. “We’re fortunate to have the gifted talents of Anna and Allison, with their wit, intelligence and incomparable comic skill, heading up such a brilliant cast on this noteworthy series,” he said in a statement.

It’s nice to see how much the network appreciates the show, and it looks like the cast of Mom is just as excited about its future. In an Instagram post, Faris shared a still from the Season 6 finale, and captioned the photo,”Tomorrow night is the season 6 finale — See you next season- cannot be more grateful to my amazing cast, writers, and fans- I love you all.”

Actress Beth Hall, who plays Wendy on the series, also shared her excitement about the renewal on Instagram. And Jaime Pressly, who portrays Jill, posted a picture of the cast and crew sitting down for a meal with the caption, “2 MORE SEASONS!!! YAY!!!!!!”

One of the biggest stars of the show is Janney, who earned numerous Golden Globe nominations and two Emmy wins for her role as Bonnie on Mom. After long contract negotiations with the network, the actress was thrilled to announce that the show was renewed for two more seasons. “TFW the job you love gets even better,” she captioned a Feb. 5 Instagram post of her and Faris on set. “Season 7 & 8 here we come! Yay!”

A two season renewal means fans will get a Season 7 and 8 for sure, but there’s still no word on what the storylines for Bonnie and Christy will be. I’m sure fans will get plenty of time to get situated with Bonnie and Adam’s new life as a married couple next season, and see how Christy fares now that her sponsor, Nora, is moving away.