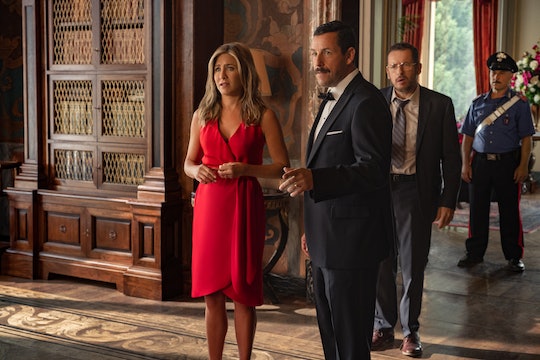 If you watched Adam Sandler and Jennifer Aniston's new comedy on Netflix, chances are you've come away with one question: will there be a Murder Mystery sequel? There's definitely more than one reason fans of the two comedy stars are asking that question.

Sadly, there's no sequel in the works right now, but that doesn't mean it won't happen. There are a few reasons why I'm definitely not ruling it out. First of all, the movie leaves the possibility on the table. At the end of the movie, Nick and Audrey board a train conveniently named the Orient Express in an obvious nod to Agatha Christie's infamous mystery novel Murder On The Orient Express. Perhaps the couple will discover an American has been murdered on their ride and work tirelessly to unmask the murderer and save passengers' lives — but in a funny way of course. That plot writes itself.

Obviously just the fact that I think a sequel to the movie would be great fun is not enough reason for a sequel to be made. God knows there have been plenty of regrettable movie sequels made. But I'm still not giving up hope.

While both actors are undoubtedly very busy at any given time, I hope they could fit working together again into their schedules. Sandler's Uncut Gems is currently in post-production and marks a rare dive into drama for the actor. He'll play a jeweler to the stars who is robbed. Sandler is also set to voice Dracula in Hotel Transylvania 4. He seems to be really into the crime genre, so another funny crime film might be something he signs up for next.

Aniston will soon star in The Morning Show for Apple TV+ with Reese Witherspoon. It's a behind-the-scenes look at the work and drama involved in making the shows that America wakes up to every morning and I'm so excited for it. The two will play "aspirational female characters" and Witherspoon called the show “a high-velocity thrill ride in which we pose questions without easy answers.” Seriously, put it on my TV right now, please.

There are a couple of other projects in the works for Aniston, but another reason I have high hopes for a Murder Mystery sequel is, well, because the actors are open to it. They told New Zealand journalist Shannon Ryan for The Project that they are totally open to filming the sequel in that country or anywhere else. Aniston said, "We're taking suggestions [for location]...there's a suggestion box." Later in the video she said to Sandler, "I can't wait to do it again, honey."

Sandler told his longtime friend, in The Project video with Ryan, "Let's go again, honestly. We have to." Then he put some stakes on it. "If we don't do it again, I'll be mad at you." Of course, nothing is a done deal yet, but they seem ready to go tomorrow if they were asked. If not a Murder Mystery sequel I predict they'll team up on a project again before they retire. So, there's the potential for many more laughs to come thanks to the duo.