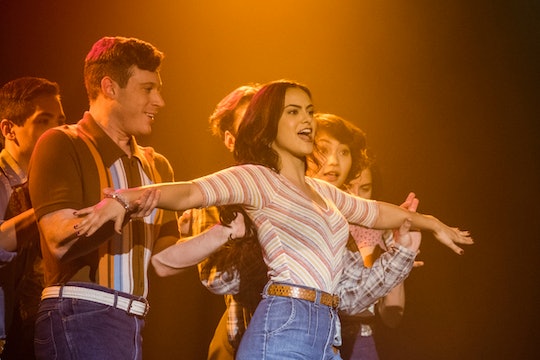 Amidst all the Black Hood drama and mystery on Riverdale last season, fans were pleasantly surprised to see their favorite characters belting out tunes in the musical Carrie episode. There’s no shortage of murder and mayhem this season either, so fans are counting on getting another musical change of pace. If you’re hoping to see Archie and the gang sing again, you’re probably wondering, will there be a musical episode of Riverdale Season 3?

You’re in luck, because Riverdale showrunners have confirmed that there will be a musical episode towards the end of Season 3, and it looks like it’s going to be killer. In Season 2, the students of Riverdale performed Carrie the musical, a stage adaptation of Stephen King’s thriller, Carrie. The entire cast — sans Jughead — sang, danced and performed, with Cheryl front and center as Carrie, a telekinetic high school outcast who burns down the school.

For Season 3, Riverdale is tackling Heathers: The Musical, a high school horror musical that was adapted from the 1989 movie, Heathers, starring Winona Ryder, Shannen Doherty, and Christian Slater. For those who aren’t familiar with the story, Heathers is about a high school teen named Veronica who plans revenge on her popular clique of friends — which consists of three wealthy girls named Heather — but ends up in a deadlier situation than she hoped. Sounds like the perfect musical fit for Riverdale.

According to Entertainment Weekly, Riverdale showrunner Roberto Aguirre-Sacasa revealed that the Heathers episode will air on Mar. 20 and will feature musical parts for every cast member. “Last year, we had a blast doing Carrie,” said Aguirre-Sacasa. “This year, we wanted to honor another iconic teen movie. Heathers: The Musical is BIG FUN, with great roles for the Riverdale kids, and everyone is singing.” Does that mean fans finally get to hear Jughead belt out some notes this time around? I sure hope so.

In the musical episode for Season 3, titled “Big Fun,” Josie will take center stage as Veronica from Heathers, and in an interview with Seventeen, actress Ashleigh Murray (Josie) said that she hadn’t heard of the play until they began rehearsing. Actor Casey Scott (who plays Kevin) told Seventeen that fans can expect to see the cast come together to sing their hearts out. "There’s this really beautiful moment where the entire cast is on stage together and it was really cool to do that cause we don’t get to get all together that often," he said."I know a couple of the people that were in the most recent production and they sing their faces off, so I hope we do them justice."

While no trailers for the musical episode have been released yet, you can still catch little sneak peeks into the episode through the cast and crews’ social media pages. In one tweet Aguirre-Sacasa posted a picture of the musical’s cast list , and in another tweet he shared the cover of the episode’s script, which features an image of Cheryl ripping up a love note to herself.

Luckily, fans don’t have to wait too long to see what kind of excitement and drama the new musical episode of Riverdale brings. And hopefully, this time around, they’ll get finally get to hear Jughead sing.

New episodes of Riverdale air Wednesdays, at 8 p.m ET on The CW.