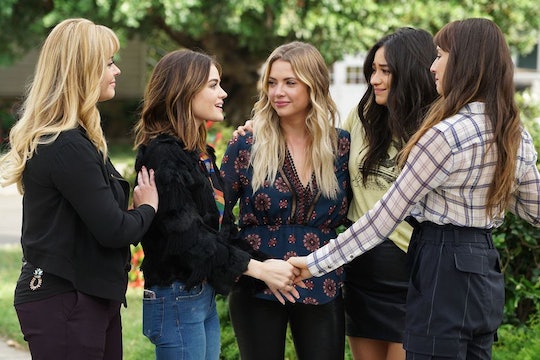 A 'Pretty Little Liars' Spinoff Could Be In The Works

Pretty Little Liars is coming to an end and many fans are not ready to say goodbye to their favorite characters. But maybe they won't have to. Nowadays spinoffs and reboots are totally in and while PLL's first spinoff, Ravenswood, didn't do so well, that doesn't mean show creator I. Marlene King wouldn't try again. So will there be a Pretty Little Liars spinoff in the future? Fans certainly hope so and already have theories about what it could be about — because of course they do.

King has been asked several times about potential spinoffs and she's certainly into the idea. "It's not a for sure thing but there's definitely some ideas swirling around out there," she told Entertainment Tonight at the ATX Television Festival. "Everybody knows I love this world. I love to play in this world and I love these characters, so it would be fun to keep a few of them moving forward in their lives."

Thus far, King hasn't given clues about who the spinoff could possibly be about, but fans at the festival suggested a Mona spinoff. "That sounds fun," was all King said on the subject though. There's also rumors that King may develop PLL author Sara Shepard's other series, The Perfectionists, into a Pretty Little Liars spinoff.

It was announced way back in 2014 that King was bringing the book series to Freeform (previously ABC Family) as a new TV series, but nothing seemed to ever come of it. However, in January King tweeted that she's "finally adapting" the thriller series and that she's "adding a twist on a twist."

Many believe that twist is that the new show will crossover with PLL and some even suggest that the introduction of Addison Derringer is the set up for the spinoff, especially since Addison will be returning for the series finale. However, there's no Addison character in The Perfectionists series, but that could just mean a character's name was changed.

Reddit user tiagob94 did notice that there are two characters listed in the Pretty Little Liars finale that have the same names as two of the characters in The Perfectionists though. The actresses playing these characters are also teens, which is the age range of the characters in the books. While this could just be a coincidence, it definitely seems like a spinoff is being set up.

Hopefully, if there is a spinoff, it'll be revealed in the series finale of Pretty Little Liars, which airs on Freeform at 8 p.m. ET on Tuesday, June 27.