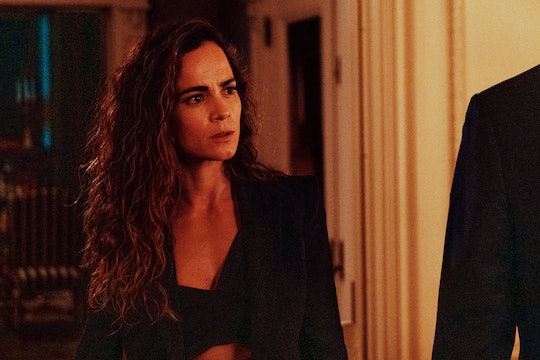 With "Vienen por ti," the fourth season of Queen of the South comes to a close. In the finale, which airs on the USA Network on Aug. 29, Teresa (Alice Braga) attempts to take down an enemy, but an unexpected visitor complicates things. That sounds like the start of a new storyline, not the end of one. So will there be a Queen of the South Season 5?

As of right now, it's impossible to say with any certainty whether the show will have another season or not. USA hasn't announced a renewal — but it hasn't announced a cancellation, either. Promotional tweets on Queen of the South's official Twitter do refer to "Vienen por ti" as a season finale and not a series finale. That could be a sign that it will continue on for another season; it seems fair to assume that that's the case, at least. But on the other hand, one should never make assumptions with TV shows. So many great series have been unexpectedly cancelled, so one should always be prepared for that eventuality.

But either way, it's all speculation. Until USA confirms or denies Season 5 of Queen of the South, it could go either way. And it does seem probable that this isn't the end, or it would have been advertised as such.

Season 4 also launched Teresa in a new direction that could take more than a single season to explore. She relocated her operation to New Orleans, which opened the door for new stories and characters to enter the picture. Teresa's arc also spun into a darker direction, according to star Braga. While talking to TVLine, she said, "So much has happened that I think she realized there's no way out of being in this business and having to make hard decisions related to choices between the people you care for and the people who are threatening you."

That could push Teresa to take drastic action in an attempt to keep everything from spiraling out of control. But Braga said Teresa's new mindset could result in some new opportunities, too. She's already expanded to New Orleans, but could continue to widen her scope. Teresa could take her business to New York or Europe. Braga noted that there was a "sense of going bigger and growing stronger in the business," which would be a great avenue to explore in a potential fifth season.

However, Braga added, "But there is a big turnaround in the last episode, and I cannot talk about it!" It's possible that the Season 4 finale will be especially shocking, or even end on a cliffhanger. Teresa is in a dangerous business, so anything could happen. And it sounds like whatever does occur is something big that may pave the way for the main arc of Season 5. I'm not a psychic, but it certainly sounds like Queen of the South has more story to tell. Whether or not it gets the chance to is something only USA can determine.

Queen of the South airs Thursdays on USA.