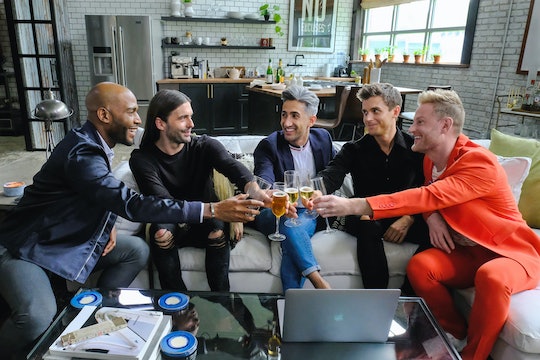 Netflix is rebooting Queer Eye for a new Republican presidential administration (grooming guru Jonathan Van Ness insists the two are necessary cultural counterweights) and the first eight-episode season drops Wednesday, February 7. Given the huge success of the original Bravo series, which ran from 2003 to 2007, fans may be wondering: will there be a Queer Eye Season 2 on Netflix? The series hasn't been picked up for a second season yet, but there's already a fair amount of buzz about it.

The cast has gotten a makeover, too, with a slightly more racially diverse Fab Five signing on this time around. Joining Van Ness, who replaces Kyan Douglas, is Karamo Brown, who replaces Jai Rodriguez as the culture expert. Brown boasts the title of the first out gay black man on reality television when he was cast on MTV's The Real World: Philadelphia back in 2005. The reboot also gets some Pakistani queer representation in Tan France, replacing the inimitable Carson Kressley as the fashion expert. Rounding out the cast are Bobby Berk, who replaces Thom Filicia as the design doctor, and Antoni Porowski, who replaces Ted Allen as the food and wine connoisseur.

The other big difference between the original Fab Five and the new class? This is a decidedly tenderer bunch. They ditch the signature cattiness of the original series in favor of dismantling toxic masculinity by preaching the gospel of vulnerability to their makeover clients.

"The original fight was for tolerance; our fight is for acceptance," France shares in the opening of the Queer Eye reboot's trailer. Amidst the show's many revamps, they're nixing the "For the Straight Guy" part from the title, which the original series dropped in Season 4. This version of Queer Eye is more inclusive in who they chose to makeover. For instance, while there are the usual bumbling straight dudes who need the Queer Eyes' help, there's also a young black man who wants to come out to his stepmom featured as the makeover recipient in one episode.

The Bravo series was based in New York, but this new version of Queer Eye takes the show on the road to bring the Fab Five to locations generally thought of as being more hostile to queer folks. Of course, this is all part of the show's attempt to promote ~unity~ in a very divided America. They visit lots of white conservatives living in the south, including a white cop, whose friend decides to pull them all over as a joke during the episode. It's obviously super tense and uncomfortable, but it also gives Brown an opportunity to start a dialogue with the police officer about their respective communities' relationships to each other.

In the trailer, we also see a Southern makeover recipient with the beard of ZZ Top ask Berk who in his relationship is the husband and who is the wife. It's obviously totally cringeworthy, but the two queer eyes in the car with him help him break down his misconceptions about queer relationships and it becomes a very heartwarming teachable moment.

It's all a little after-school special, but that's also not a huge departure from the premise of the original series. There were frequently moments in the Bravo version when whichever member of the Fab Five connected best with the client convinced him to let his guard down and be more vulnerable, especially with their partners. It looks like this version will carry on with that tradition, with varying degrees of success.