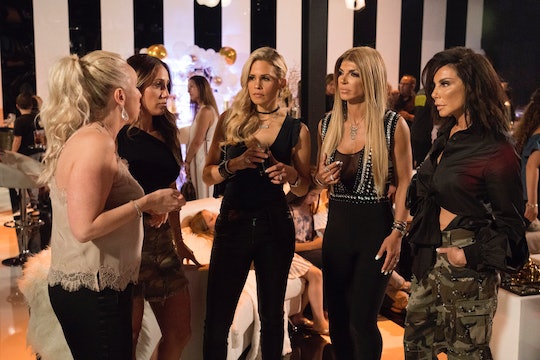 The Real Housewives of New Jersey Season 9 concludes with "Hotheads and Hookahs," bringing an end to an eventful season full of shifting friendships, drunken squabbles, and at least one shattered glass. As the show prepares to go on hiatus (after a few drama-filled reunion episodes, of course), it could be comforting to know that it won't be gone forever. So will there be a Season 10 of RHONJ?

Technically, the future of the show is uncertain. It hasn't been officially renewed for a tenth season and Bravo hasn't made any announcements about their plan for the series. But that doesn't mean the show won't be back. At this point, RHONJ returning feels like a sure thing. It's been one of the staples of the Real Housewives franchise since its premiere 10 years ago. Every year since, it has served its fair share of mansions and melodrama, from table-flipping to shady parenting columns. As long as RHONJ continues to deliver, I can't see why it would be cancelled. Plus, so many feuds were spawned in Season 9, and viewers will need to see if those fights continue or resolve in unexpected friendships.

Season 10 might not be confirmed, but it seems almost certain that RHONJ will be renewed.

And RHONJ is still generating interest. Season 9 introduced two new women to the cast, both of whom made an immediate impression. Jennifer has butted heads with everyone from Margaret to Melissa, as well as getting into a major disagreement with the other new Housewife, Jackie. For her part, Jackie has had no problem calling out Teresa for her unfair treatment of Melissa. And older grudges have reemerged this season, too: Melissa and Teresa will seemingly never see eye to eye, while Danielle and Margaret had an explosive falling out. The biggest shock is still that Teresa and Danielle are closer than ever. Table flipping makes the heart grow fonder.

The Season 9 finale airs on Bravo on Feb. 13, but there will be a multi-part reunion special before viewers have to say goodbye to the ladies for the year. If renewed, RHONJ may return in fall 2019. It used to premiere in spring and summer, but the last couple of seasons have debuted in the autumn. That means it may not be long before you have the women of New Jersey back on your screen again. Anything could happen, but cancelling this series just seems too unlikely.