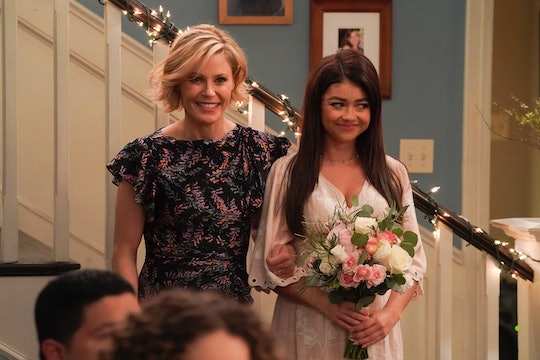 'Modern Family' Has Been Making Fans Laugh For 10 Years

Modern Family concludes its tenth season on ABC on May 8, closing out a decade spent watching Pritchett family grow and change. Viewers have seen them come a long way, but that journey is almost at an end. Not quite yet, though. There will be a Season 11 of Modern Family, but you probably shouldn't get your hopes up for more than that.

According to Variety, the eleventh season of the show will also be its last. That means there will be one more season left to say goodbye to every branch of the family, which should be long enough to tie up every character's storyline in a satisfying way. It's not entirely clear when Season 11 will return, however; Variety mentions it airing in 2019/2020 without offering a specific date. However, Modern Family has stuck to a regular schedule since it first debuted in 2009. Every season tends to start in late September and finish sometime in May. The final countdown could begin in just six months, if that speculation is correct.

While it's sad to see any show come to an end, Modern Family has had an impressive run. Now it can plan the perfect way to say goodbye by devoting a whole season to farewells.

Karey Burke, the president of ABC Entertainment, praised showrunners and series creators Steve Levitan and Christopher Lloyd in a statement to Variety. "Chris and Steve have created one of the most seminal and iconic comedies in television history," Burke said. "In its final season, there will be more milestone events that anyone who has been a fan of the series won’t want to miss." Maybe fans can expect more babies, weddings, and career advancements as each of the Prichett kids grows up a little bit more.

Levitan and Lloyd responded to the news with characteristic humor in their own statements. "For 10 years, our characters have bravely faced turning points in life and moved through them to great personal enrichment," Lloyd said. "We have chosen a different path by doing one more season of Modern Family."

Levitan added, "Even after 10 years together, we realized there are still some things our writers don't yet know about each other's sex lives." After working together for so long, it's probably very difficult to part ways, so it's understandable that they'd want to postpone the inevitable if they can. They'll have to make every moment count as the show embarks on its final stretch of episodes.

An exact episode count hasn't been announced yet for Season 11, but nearly every season of Modern Family clocks in at 22 or 24 episodes. It's always possible that the final season will have a shortened run, giving the writers just enough time to tie up loose ends. But it sounds like everyone who works on the show is happy to stick to the formula that worked for them for so many years. There's no guarantee, but it seems like the final season of Modern Family will stay true to itself in almost every way.