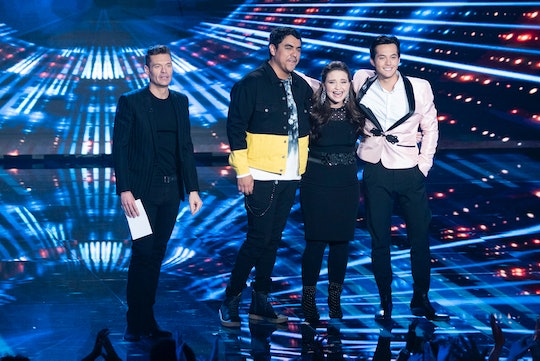 'American Idol' Will Return With Fresh Talent For Season 18

From beginning to end, every season of American Idol makes you feel like you’re on a journey with the show’s talented contestants, and when the winner is crowned, you say your bittersweet goodbyes. But if you’re counting on seeing the show return with fresh talent next year, and you can’t wait to jump back into the exciting audition rounds, you might be wondering, will there be a Season 18 of American Idol?

Luckily, you’ll get to meet a whole new pool of talent next year, because according to Deadline, ABC is renewing the show for another season. As the second-highest rated unscripted series (The Bachelor has the top spot), American Idol is doing well for the network, so it makes sense for them to give it another go. This would be the third season for American Idol on ABC, but if you add in its run on Fox from 2002 to 2016, the upcoming season would be counted as Season 18 for the show overall.

So, the good news is American Idol is coming back next year, but the bad news is that it may not return with the same panel of judges. As reported by TV Line, ABC is looking to cut some costs on the show, including the judges salaries. Katy Perry (who gets $20 million per season), Lionel Richie, and Luke Bryan have all been asked to return, but they are in the middle of serious salary negotiations with the network. If all parties don’t come to a mutual agreement, you might end up seeing new faces on the panel next season.

But for now, I would suggest soaking in all the amazing performances on the Season 17 finale. According to Entertainment Weekly, you can expect to see solos from the final contestants — Alejandro Aranda, Madison VanDenburg, and Laine Hardy — as well as duets between past contestants and the judges. Katy Perry is set to perform “Unconditionally” with Jeremiah Lloyd Harmon, Lionel Richie will sing “Dancing on the Ceiling” with the Top 10, and Luke Bryan will take the stage with Laci Kaye Booth to perform “Knockin’ Boots” and “Every Breath You Take.”

You’ll also see former American Idol winner Carrie Underwood perform her new hit single, “Southbound.” And former runner-up turned rock sensation, Adam Lambert, who is the new frontman for Queen, will take the stage to sing the band’s iconic track, “Bohemian Rhapsody.” Daddy Yankee will also join in on the finale fun with Perry, as the two are slated to perform his hit single, “Con Calma.”

The Season 17 finale will also feature performances by Weezer — who will take the stage with Wade Cota and Walker Burroughs to perform a medley of “Africa,” “Take On Me” and “Everybody Wants to Rule the World” — and Montell Jordan, who is set to perform “This Is How We Do It” with contestants Margie Mays and Austin Michael.

This season of American Idol has been an exciting ride for fans, and the season finale looks like it will be just as thrilling. Luckily, after the winner is crowned, you’ll still have entire new musical journey to look forward to next year.

The season finale of American Idol airs on Sunday, May 19 at 8 p.m. ET.