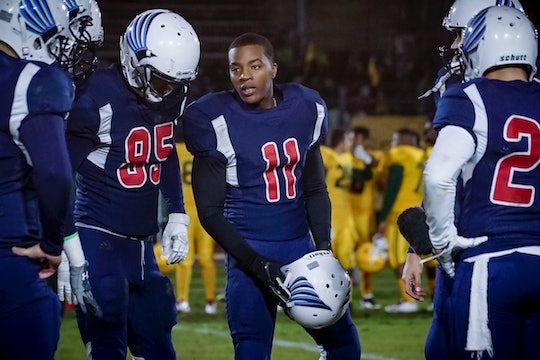 The CW's freshman sports drama All American airs its Season 1 finale on Wednesday, March 20. The show follows football player Spencer James (Daniel Ezra) as he essentially juggles two lives — one at his school in Beverly Hills where he plays football and another at home in the rougher area of South Central LA. It's gotten mixed reviews from critics and has been struggling in the ratings. But will there be a Season 2 of All American?

There is no answer to this question yet, and it's a very difficult one to guess. You see, earlier this year at a winter Television Critics Association (TCA) press event, CW president Mark Pedowitz had nothing but good things to say about the show, but it didn't get an early renewal like 10 other CW titles. Entertainment Weekly reported Pedowitz as saying, "It is a show I’m proud to support." And he has a history of doing just that — regardless of ratings. So there is hope.

Let me give you proof. Jane The Virgin and Crazy Ex-Girlfriend are two critically-acclaimed CW series that struggled with ratings in the past. Yet, they'll both air their final seasons this year, as all of the showrunners had planned. They were not cut short.

At the 2017 TCAs, Pedowitz renewed both Jane and Crazy with an explanation you'll probably never hear from another network president. “It has nothing to do with numbers,” Variety reported him saying. "When you have great critical work, critically acclaimed, award-nominated shows like ‘Crazy,’ it deserved to be picked up. Sometimes with critically acclaimed, great programming, you just [renew it] and hope that it finds an audience."

One platform that might help All American find an audience is Netflix. The show will begin streaming on the platform later in March, and if the streaming numbers are good there the outlook is good on the show's survival. While Pedowitz's take on renewing shows is refreshing, numbers do matter a whole lot in the TV business, so make sure to stream the show if you love it.

Pedowitz is saying the right things and has called Episode 15 of the show "“some of the best TV you will ever see.” But, leaving it off of the early renewal list sends a conflicting message.

Taye Diggs, who stars as Coach Billy Parker on the show, loves that the show encompasses so many unique elements. There's drama, of course. But he also loves the athletic element of the show and how it sparks conversations about social issues that we need to be having.

“I really commend our writers and the CW and the WB for tackling and digging in at a time when people are running scared," EW reported Diggs saying at SCAD's aTV Fest in early February. "I’ve never been as proud to be part of a project as I am on this one. It was a role that called me. When I finished the pilot episode it was something that I knew I had to be a part of.”

All American definitely seems like a show that deserves a chance and may have a better one if he's clear on the fact that his network has one name. As for All American fans, the most important role you can play in helping the series get renewed is to watch it over and over again on Netflix and tweet about it. It's a tough job, but it really does matter.