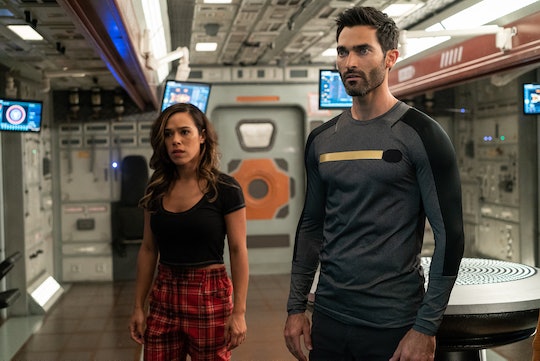 It’s an alien invasion on Netflix’s new series, Another Life, and it’s bringing viewers plenty of sci-fi nostalgia. The show follows Niko Breckinridge — played by Battlestar Galactica star Katee Sackhoff — and her team of interstellar explorers as they investigate a mysterious alien artifact that sends them on a dangerous journey through space. The season ends on a major cliffhanger, which has viewers wondering if there will be a Season 2 of Another Life.

As of now, there’s no word on a second season, but Netflix may announce renewal or cancellation news later this year. The series received mixed reviews out of the gate, with an overall low critics’ rating on Rotten Tomatoes. However, its future will most likely be determined by its viewership numbers and fan buzz. So if enough people watch Another Life and talk about it, Netflix may bring it back for another season.

If you noticed the series incorporates elements from various other sci-fi projects, you're not alone. Its alien ship landing feels a lot like the beginning scenes of Arrival and Annihilation, and its space missions are reminiscent of shows like Star Trek and Babylon 5. But what does set this show apart is its cast of familiar faces, particularly Selma Blair, who returns to the screen as Harper Glass — a popular social media icon who cozies up to the extraterrestrial invaders. Sackhoff’s return to space also feels special, especially for Battlestar Galactica fans who’ve been pining to see her back in a role like this.

In an interview with Collider, Sackhoff — who is also part of the show’s production team — talked about how she helped detail the series’ story and assisted in mapping it out for multiple seasons. “We had the outline of what the show was gonna be, but I was in the writers’ room and I got to really put what I feel is my fingerprint on the show, which is something that I was really looking forward to,” she said. “So, we know where the show potentially will go for the first three seasons. As an actor, that was new for me. To really be a part of those conversations and to have an opinion was really cool.”

Sackhoff also noted that Netflix hasn’t given the green light for Season 2, but she’s keeping her fingers crossed that it will happen soon. “With producing the show, I’ve been in every single one of the sound mixes and every single one of the edits,” the actress explained. “I wanted to learn as much as I could, as a producer on this, and really earn that hat because it’s something that I took incredibly seriously. I love this character, and I love the cast and the crew, and I want to do everything in my power to see it come back, for many years.”

The show's creators and cast seem ready for another two seasons, but the future of Another Life really lies in the hands of Netflix executives. Fans will probably hear some definitive news by the end of the year.

Another Life is currently streaming on Netflix.

More Like This
Exclusive: Three Siblings With Super Powers Protect National Parks In Spirit Rangers
'Workin’ Moms' Season 7 Is Reportedly In The Works! Here’s Everything We Know
'Squid Game' Is Coming Back For Season 2 On Netflix: Here’s What Parents Need To Know
The Office Halloween Episodes: A Definitive Ranking